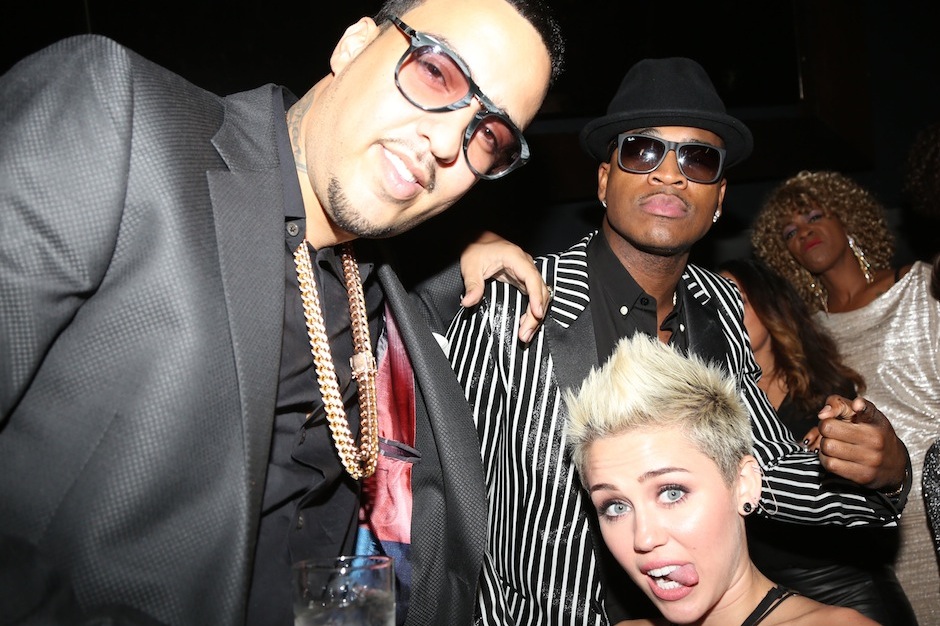 One of the early indications that Miley Cyrus’ 2013 was probably going to be unlike anything we’ve ever seen was a grainy video taken on an iPhone and uploaded to YouTube in mid-August. It showed Cyrus in the studio with the New York rapper French Montana singing along to what appeared to be a remix of Montana’s bubbling street hit “Ain’t Worried Bout Nothin” — complete with an entire Cyrus rap verse. By now, we’ve heard the demented funhouse that is Cyrus’ Bangerz, we’ve heard her rap on Mike Will Made It’s “23,” we’ve seen her bare all for Terry Richardson, and we’ve seen her fuck a foam finger at the VMAs, so the full studio version of her “Ain’t Worried Bout Nothin” seems more or less routine at this point.

But the track, which has surfaced now in full, is stillan interesting look at Cyrus’ mindset before things really blew up — pre-FCC complaints, pre-Sinead O’Connor open letters. “Broke the record on the day I dropped my video / I got three thick girls in my video,” the former Hannah Montna drawls, either unaware of or unconcerned by the issues that have been raised regarding the prominence of “thick” black women in her visuals. She caps off the verse by rapping, “Acting like a little southern girl, now I’m twerking like I grew up in Atlanta,” a sentiment that almost seems quaint now that Cyrus has helped get “twerk” added to the dictionary, But the most ominous moment of the verse turns out to be a prediction: “You think I’m turnt up? Wait ’till my album drop.” She also quotes “Versace,” for whatever that’s worth.

Though the remix is another event to examine in what long ago became a fascinating cultural case study, we’ll probably have to wait for Miley and Kanye West’s “Black Skinhead” remix to be really shocked.

In other Miley news, Sufjan Stevens wrote a predictably condescending “open letter” to Cyrus regarding her use of “laying” instead of “lying” in her song “#GETITRIGHT.” At least that’s what we believe it’s about, since we stopped reading after he told Miley she had a “great body” in the letter’s opening sentence. Someone also asked Paul McCartney about Miley for some reason, though Macca quickly waved away Miley critics by saying that the singer is “just having a go.” Thankfully, he didn’t say the word “twerk,” though Sir Paul would maybe want to rephrase if he found out that on Bangerz Cyrus often sings about pissing herself.