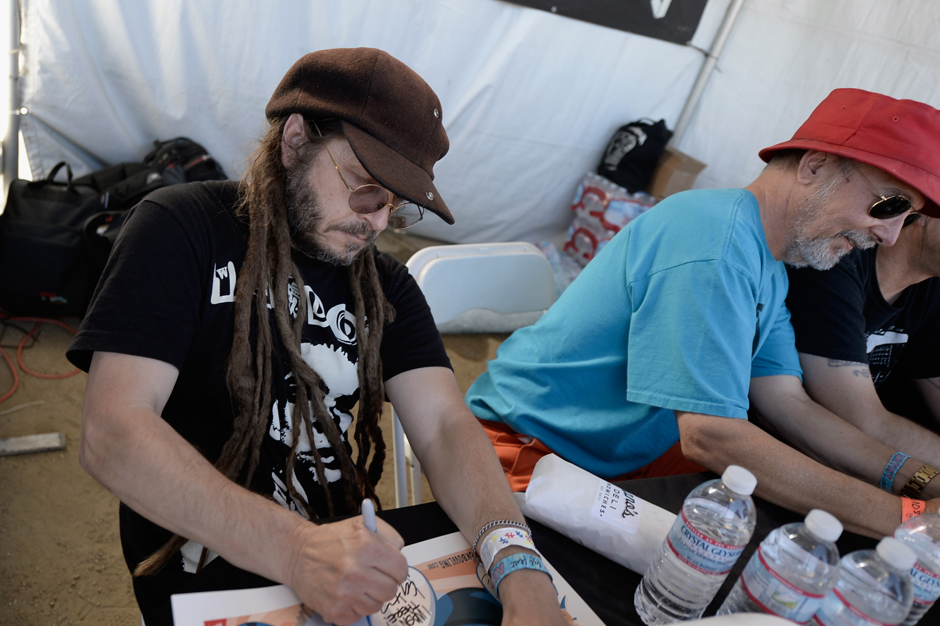 UPDATE: FLAG’s camp now says Ginn lost his “preliminary injunction” against Keith Morris’ band and Henry Rollins, not the actual lawsuit. The lawsuit has not and could still go to court, but this ruling essentially says that it has very little chance of holding up.

Black Flag founder Greg Ginn has lost the preliminary injunction in his lawsuit against FLAG, the spinoff band featuring founding singer Keith Morris and longtime bassist Chuck Dukowski. While FLAG — which also features OG members Dez Cadena and Bill Stevenson, and Descendants guitarist Stephen Egerton — has been out destroying shows like this Redondo Beach Moose Lodge thrasher, Ginn has reformed his own Black Flag unit and hit some festivals here and there. Henry Rollins isn’t involved in either, but somehow he was named in the suit.

The rub seems obvious, if not a little too by-the-Highlander-playbook: In Ginn’s opinion, there can only be one Black Flag, and though the other fellas are playing under a modified name, they shouldn’t use the handle they’ve adopted or the iconic Black Flag logo. (It doesn’t help that they’ve all been playing the same songs.) Further, Ginn accused Rollins of using and abusing the legacy too, and alleged that both Morris’ unit and Rollins attempted to secure their rights to the Black Flag copyright by manufacturing or selling (or something) bootleg records and T-shirts.

The details seemed hazy to begin with and the legal action appeared not a little bit petty, plus futile considering how many key membership changes the band went through over the years. No surprise, the decision is in and the court ruled against Ginn and his iconic Southern California punk label SST.

A judge found that: SST has no rights to the Black Flag copyright; Ginn has no special rights to any of the trademarks; neither Ginn nor the label gave a damn about copyrghts or trademarks until now; Rollins never quit Black Flag (!); fans are smart enough to know which band is which; and nobody tried to screw anybody over, so let’s all give it a rest.

Here’s what all of that looks like in legalese, via FLAG’s camp:

(1) the court found that SST had no rights in the trademarks;
(2) Ginn seemed to have no individual rights in the Black Flag trademarks;
(3) even if either had had any rights in those marks, they had abandoned those rights through a failure to police the mark for nearly 30 years;
(4) the defendants’ claim that the Black Flag assets were owned by a statutory partnership comprised of various former band members – even if these members only consisted of Henry and Ginn, based on (a) accepting Ginn’s argument that he never quit and given that there is no evidence or allegation that Henry ever quit – has merit;
(5) that even if the plaintiffs had some trademark claim in the marks, there was no likelihood of consumer confusion between Black Flag and Flag given the ample press coverage over the dispute; and
(6) the trademark application and registration that Henry and Keith made was done in good faith (e.g. not fraudulently) – and is thus not necessarily subject to cancellation – given that they understood their actions to have been done on the part of the Black Flag partnership (see No. 4, above).