Journey to the Center of Earthless: A Heavy Chat With the Psych-Rock Gurus

Talking with Mario Rubalcaba, drummer on one of the year's best and wildest albums, 'From the Ages' 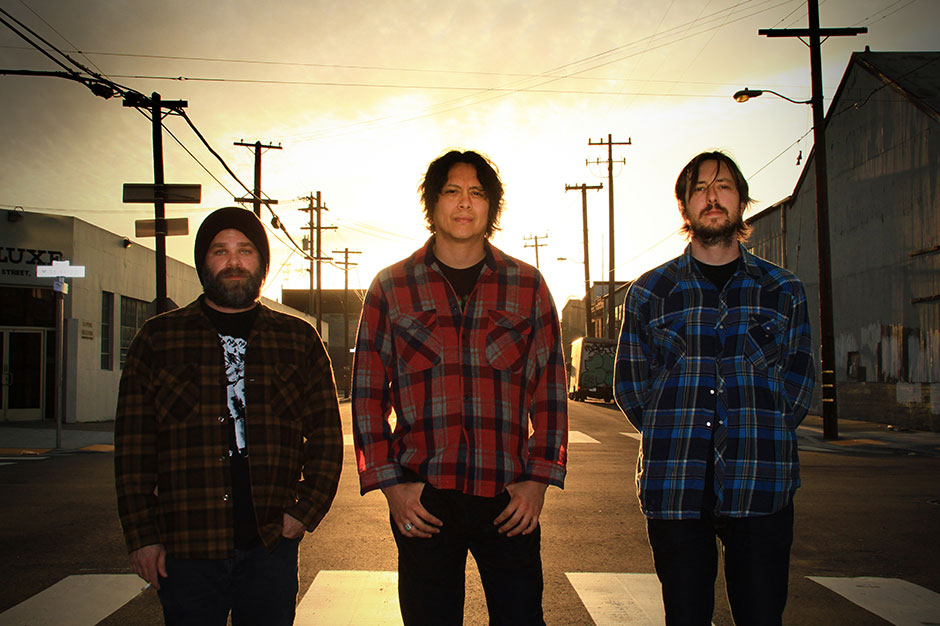 Many things might occur to you while listening to From the Ages, the long-awaited third album from San Diego instrumental psych-rock trio Earthless. Over the course of the album’s four tracks and 63 minutes, you might wonder if the winding, bucking songs are improvised, or what titles like “Violence of the Red Sea” and “Equus October” are all about. You might ponder the power source of guitarist Isaiah Mitchell’s rippling distortion and bassist Mike Eginton’s quivering bass, or, indeed, how many arms drummer Mario Rubalcaba has. (Two, is the answer to that one.)

Or you might ruminate on just how, exactly, a band puts together such an epic, dense, and intuitive musical monolith like this. The caveat, of course, is that you’re quite likely to have your mind blown from the album, which renders any questions pretty much moot.

We spoke with Rubalcaba shortly before From the Ages’ October 8 release date.

The album has four songs. Two are 14 minutes long, one is five minutes long, and the last is 30 minutes. What is the process of putting those massive-length songs together? Do you go into the studio and jam? Do you chart out where the songs are going to go ahead of time? Do you roll the I Ching and take it from there?
It’s an evolving thing. Some of these songs have been around for a while as little practice warmups or something. We haven’t really been a practicing band in a while, because Isaiah lives up in Northern California, but when we do get together to play, we usually have a lot of riffs and drumbeats pent up. It’s a pretty organic thing. Mike [Eginton] always seems to have a good feel for something to play that really frees up the drums and guitars to do what they want. The chemistry that we kind of have —  I’m trying to think of  a non-cocky way of putting it — means we’re pretty good about making something effective happen. At the end of a jam session, we’ll be like, “Hey, there was this little thing we can kind of fit into another piece we have going.” The jams actually become structured with a little bit of space, so we can be loose and then come back to the structured riff that we’d somehow come up with.

Do you record all the jamming you guys do?
No, we don’t do any of that.

So you just remember the good parts?
Mostly. If it’s an effective riff, it will stick in our heads. There are tons of quote-unquote songs that we do on the spot that we never tape. Or we just have no idea what we did, but know they were fucking awesome. That’s the cool thing about improvising, which is different then jamming. Jamming is when people don’t really know what they’re doing, and they’re just plicking and plucking and not making any sense out of it. Improvising is composing on the spot so that it comes off like jazz musicians — it sounds like its orchestrated, but you’re doing it off the top of your head or out of your heart or out of your soul. You’re in control of it.

And that’s what Earthless does?
Exactly. We have a pretty good focus, and we are able to really read each other. There’s always openness in the music that allows us to trail off and come back and be able to look at someone when we feel like changing back into the old beat, or the new beat, and kind of just wind it down. It’s a lot of eye contact and knowing how your partners play.

That kind of intuitive understanding happens a lot in sports, too.
Yeah, it’s telepathy. I don’t play in many bands where I know that the guitar player is going to bend a string a certain way and that it’s a signal to me to either amp it up or take it to the next level or stop — nothing needs to be said out loud. It’s awesome. It’s what makes music fun to play.

Are all the tracks on the album pure improvisations?
They all started off of very loose, general ideas. The first track on the album, it’s called “Violence of the Red Sea,” that’s probably the most structured. Mike wrote those bass lines. There are definitely parts where we let it breathe for a while. Before we went to record the album, we practiced for three days. Before that we hadn’t played in a really, really long time. Isaiah [Mitchell] would be just tuning his guitar and playing a riff, and myself or Mike would be like, “What was that? Lets throw that in the song real quick.” That’s just kind of how we work. We don’t try to force it.

The song “From the Ages” is 30 minutes long. Do you do multiple takes of something like that?
In the studio? No way. That song is a bastard to play. That song is actually pretty old. We had a live record come out a few years ago, Live at Roadburn, and  “From the Ages” is on that, but we never had a studio recording. Having to relearn the muscle memory and all that stuff was pretty tricky. We just gave it the best shot we had. I think we did it relatively quick, maybe had a couple tries, and if we flubbed something we’d just stop and do it over again. We recorded it pretty quickly, luckily, because the song physically takes its toll.

Obvious mistakes aside, how do you know when one take of a 30-minute stoner metal song is “better” than another?
We’ll listen back to it. Listening to a tape back in the studio is time-consuming. The songs are so long and, honestly, we start dilly-dallying and not paying attention, but we go back through it all and be critical. We don’t necessarily want to listen to this stuff all the time; we love playing it. So we know it’s good when we’re feeling it, not necessarily perfection-wise — there are a couple bum notes I could point out on the record — but when the take as a whole feels really good.

Do you listen to other heavy rock for inspiration? Or is jazz more of an influence?
We’re all over the place. We’re very into stuff that is somewhat shocking to people that are into us. We love ZZ Top. Billy Gibbons is Isaiah’s favorite guitar player, and the first three ZZ Top records are a huge influence. We like a lot of jazz — old Coltrane and Monk and stuff like that. We like kraut rock bands like Guru Guru and Amon Duul II. There are a couple Japanese bands: Flower Traveling Band and Blues Creation, but there’s also stuff like the Scientists from Australia, and mid-’60s garage punk that we really like. We also bonded on a lot of Zeppelin and Sabbath. At the very first Earthless practice, we started out with some covers. We did Led Zeppelin’s  “Communication Breakdown” and then we jammed for 20 minutes, and then we went into Black Sabbath’s “Iron Man.” Before we knew it, we’d been at it for 40 minutes.

How high do you need to be to come up with this music?
As far as, like, drug substances?

Yeah.
Not at all.

Are you kidding me?
I hate to break the myth, but we’re not exciting stoners. We’re weed-less stoner rock. We drink a lot of coffee. There was this coffee shop down the street that did this thing called cold-brew coffee. Man, I’ve never gotten so shaky off of a cup of iced coffee in my life. Maybe it made me play faster, I’m not sure. Call us Coffee Rock.