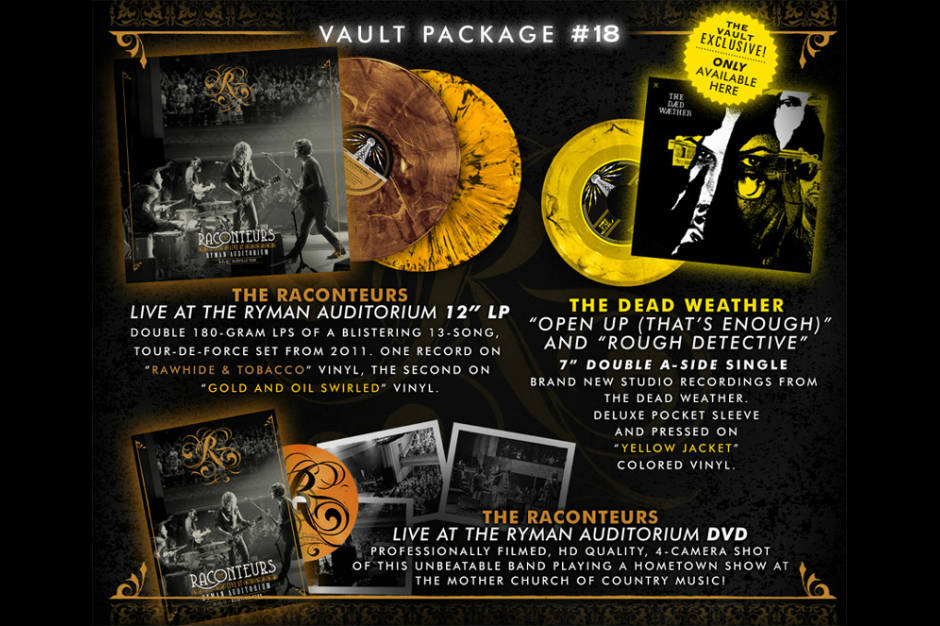 Over the summer, the biggest news involving Jack White centered on his ugly split from ex Karen Elson. The prolific rocker mainly stayed quiet until recently, when he performed at a star-studded gig celebrating the Coen Brothers’ upcoming film Inside Llewyn Davis. Finally, the Willy Wonka of vinyl is back with some new releases from the two bands of which he’s still a member — a Third Man Vault package including music from Deat Weather and Raconteurs.

White’s label posted a photo of the Dead Weather at a studio back in August, and now the man is finally sharing a new track from the group. The 30-second snippet of “Open Up (That’s Enough),” found below, features the dark garage-blues found on their previous LPs, 2009’s Horehound and the following year’s Sea of Cowards.

The 7-inch single, backed by the song “Rough Detective,” is only available to the subscription-only Third Man Vault series, and marks the first in a series of two-song sets that the band will release between now and, like, forever from now. In 2015, those new tracks will be collected into a full-length, along with a few album-only cuts.

Previous entries in the Vault include a 2003 White Stripes live album that draws heavily from Elephant. This final Third Man package of 2013 also includes the Raconteurs’ Live at the Ryman Auditorium, taken from a 2011 concert. A DVD of that Nashville show is also included in the package. Check out the track list after “Open Up (That’s Enough),” and stay tuned for more Dead Weather.

The Raconteurs’ Live at the Ryman Auditorium track list: