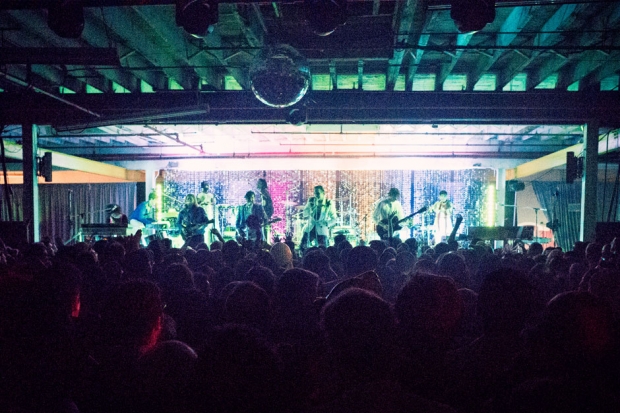 “We’ve all got things to hide,” goes a throwaway line in “Reflektor,” the disco-thumping lead single and title track of Arcade Fire’s upcoming fourth album. But by the time Win Butler sang it last night at 299 Meserole — a converted warehouse space in the Bushwick neighborhood of Brooklyn — it had become a kind of mission statement.

Arcade Fire had booked the show, along with others in Miami and Los Angeles, under the pseudonym the Reflektors. The last time the Montreal group played a concert in New York City, it was two supersized nights at Madison Square Garden, and since then their status as one of the world’s biggest bands has only grown. So this opportunity to see them in a relatively small space — 299 Meserole caps out at around 3,000 people — set off a hysterical hunt for tickets among hopeful fans, who either used presale codes or paid anywhere from a couple hundred bucks to five grand on Stubhub or elsewhere. The audience, which waited in a line that stretched a quarter mile up Meserole St., also had no qualms about the group’s caveat emptor on Ticketmaster: “Formal attire or costume mandatory.”

While that directive gave the evening a surreal, masquerade-ball air, it also turned out to be somewhat dangerous, as you’ll see.

When fans entered the event space — after seeing the band emerge from a white limo wearing the oversized masks from the “Reflektor” video — they saw a small stage with a Reflektors logo behind it and sparse gear: a drum kit, a guitar and a bass. The audience packed in around it. The scheduled set time was 9 p.m., but apart from a chorus of complaints about the escalating temperature in the venue, the only music was some classic reggae and soul on the PA. Eventually, at 9:30, former LCD Soundsystem frontman and Reflektor coproducer James Murphy walked onto a tiny stage — to a deafening welcome — to tell the audience only three Reflektors could make it. A trio of mask-clad musicians (possibly the Arcade Fire’s Win Butler, Richard Parry and Tim Kingsbury) wearing blue, Western-looking suits mounted the stage to play a reggae skank as white noise poured out of the PA. “This is garbage,” said the man in front of me.

But then the band started playing for real — on a hidden stage at the extreme left of the venue.

A well-heeled stampede ensued: Thousands of concertgoers in three-piece suits and, more dangerously, long gowns and high heels essentially formed a moving, precariously tottering mosh pit. Later in the set, Butler told the crowd: “Sorry we played a trick on you. We’ll make it up to you. We just thought it was funny. It won’t be the last time we think something is funny that someone else doesn’t think is funny.” Whether or not it was funny, it wasn’t the safest move.

But once people settled into place, “the Reflektors” put on an enthralling show, giving many Reflektor songs their U.S. concert debut. Like the crowd, the band was dressed eclectically: Butler in his Annie Lennox/Daryl Hannah makeup, Régine Chassagne in a black dress with pink frilly tassels, and the sprawling group’s percussion section wore Mexican-flavored skull masks. The group opened with Reflektor’s title cut, then moved into the echoey “Flashbulb Eyes” and then the huffy “We Exist,” in which Butler asks, “Are you so afraid to lose?”

“You guys look beautiful, by the way,” Butler said to the crowd. “I figure, we get dressed up every day. Why don’t you join us?”

A trio of new songs followed — the pounding, shambolic rocker “Normal Person,” synth-powered “Joan of Arc” and a giddy “It’s Never Over (Oh Orpheus).” The latter song, which had only previously been aired during their Here Comes the Night Time special for NBC, was built on a bed of serene synths and a funky guitar line that recalls the Clash’s “Train in Vain.” But what made it one of the night’s standouts was the group’s rousing gang vocals.

Throughout the 10-song/75-minute set, the audience stood respectfully, sort of dancing but mostly just absorbing the largely unfamiliar new songs; the tiny stage where James Murphy had made his announcement had filled with fans. It was a fairly serene night until Butler said, “Here’s a song by a Montreal band called the Arcade Fire,” and the band launched into “Sprawl II,” the last single from 2010’s Grammy-winning The Suburbs. As Chassagne took the lead vocals, a sea of arms went up; one fan even tried to crowd-surf. And at the end of the song, Chassagne was twirling scarves. But then the Reflektors guise returned with “Afterlife” and the crowd settled back into calmer mode despite the song’s upbeat drive.

“From what I understand, we sold 1,800 tickets in the presale,” Butler told the audience. Then summarizing the StubHub fervor for the show, he said, “Consider this our $500 gift to you.”

The audience perked up again for “Power Out,” during which the venue went dark for the “lights out” section, and then segued into “Here Comes the Night Time.” Butler descended the stage into the crowd, Chassagne twirled pink and orange scarves, and Butler’s brother Will climbed behind a second drum kit. But just as soon as the excitement rose, it ended, since that was the last song of the night. The band stopped playing and waved goodnight as the DJ fired up again.

Not that the audience understood the show was over: The concertgoers watched the empty stage, waiting for an encore. Some scanned the room for a hidden stage, wondering whether the band would make another surprise appearance. But after about 15 minutes, Win came back solo, out of his stage outfit, to make an announcement.

“We’re not playing any more songs,” he said. “But we’re going to play a bunch of dance music. We’re going to come out and dance with you. If you guys want to hang out and dance, that’s totally cool. But if everyone just stares at the stage, nothing’s happening. So it’s super awkward.”

“I just wanted to explain it to you so you know that it’s happening,” he continued over the kvetching. “If that’s super a bummer that we’re totally going to dance with you and party all night, then I apologize. But otherwise, I’ll see you on the dance floor.”

He left and the music came back on. Many fans decided to stick around and dance. A few concertgoers approached the sound booth and asked the audio engineers if anything else would be happening. But no, the evening’s surprises had come to an end.