Grab a bowl of cereal and hear this long-awaited sugar, sugar 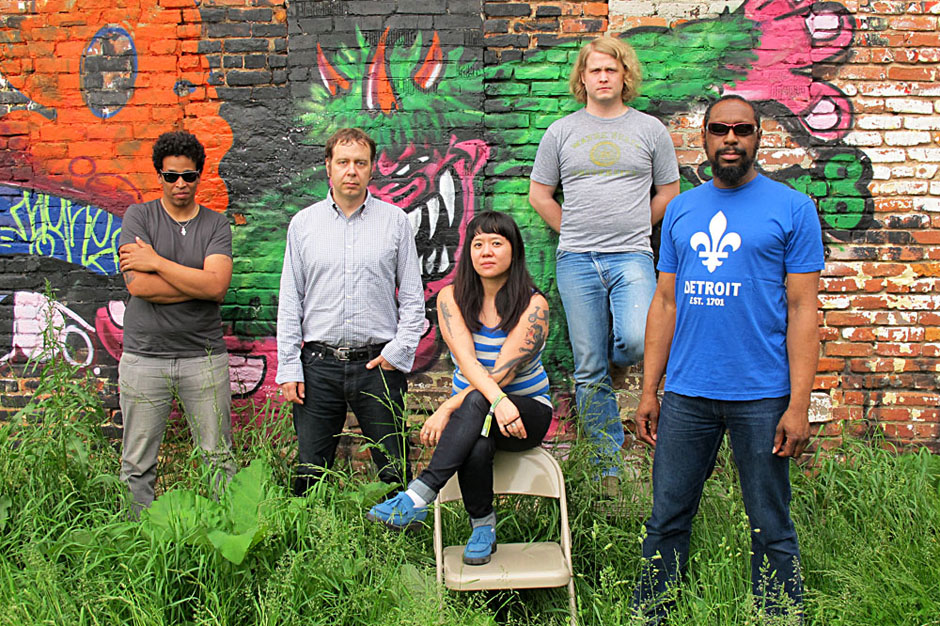 “This album is sort of my tribute to Saturday-morning cartoons,” Dirtbombs frontman Mick Collins says. “That was my scene as a kid. Every third show was about a band: the Archies, Josie and the Pussycats, the Hardy Boys. My childhood was watching bands on TV. And the music on Ooey Gooey Chewy Ka-Blooey! is what those bands sounded like, or as close as I can get them to with the Dirtbombs.”

Much like the handful of sugary songs covered by Redd Kross and the Ramones — as well as the nostalgic numbers alternative-era bands relived on the Schoolhouse Rock! Rocks comp in the ’90s — the latest Dirtbombs record finds the garage rockers paying homage to the saccharine pop sounds of bubblegum. “I had joked about making a bubblegum record for a bunch of years, but I didn’t really take it seriously until maybe two years ago,” Collins says. “Everyone kept asking for it.” So being the diligent pop scholar who previously fashioned the 2001 soul tribute Ultraglide in Black  and the 2011 Detroit techno riff Party Store, Collins began researching bubblegum. He studied the songwriting tricks that producers Jerry Kasenetz and Jeff Katz used on songs by the 1910 Fruitgum Company and the Ohio Express, and he pored over Don Kirshner’s works with the Archies and the Monkees. “Most of the album draws from the years between 1968 and 1972, because that was the prime era of watching Saturday-morning cartoons,” Collins says. “There were groups that came later that didn’t make it on — the Partridge Family, the DeFranco Family, Shaun Cassidy — but I just didn’t have time to try and go back and add it in.”

Since Collins sharply focused the album’s songwriting, the Dirtbombs recorded a lovingly tongue-in-cheek tribute to puppy love, teenage insecurity, and the days when songs about candy weren’t always creepy euphemisms for sex. “I have to admit I’m proud of it,” Collins says. “Everybody expects certain things from the Dirtbombs, which is fine by me. I’m glad the people who have heard this are into it.” Listen to all 10 of Ooey Gooey Chewy Ka-Blooey!‘s sugar comas below, read Collins’ track-by-track breakdown, and cop this candy when it hits stores on September 17.

“Sugar on Top”
Because bubblegum as a genre is a very steeply defined, you sort of wind up imitating everyone else. There’s only a few ways of doing it. “Sugar on Top” was inspired by Neil Diamond songs for the Monkees. I was also thinking of “Gimme Some Lovin'” by the Spencer Davis Group, which I love. I thought the cowbell in the song has a great hook, so I tried it on this one. For whatever reason, it just kind of got out of hand.

“Crazy for You”
When I was a kid in Detroit, there was a station called CKLW, which is actually across the border in Canada. They were a prime source for AM pop and quasi-bubblegum, not the sort of Saturday-morning-cartoons bubblegum this album is based on, but the stuff that would get played anyway. That song for me just sounds like a CKLW song to me. I wasn’t making a conscious effort of trying to write a song like that, but as I was writing the song, it was like a CKLW moment. [Laughs.] When I was first writing it, it seemed like any other song, but right as we started laying down the tracks, I was like, “Oh, this is the single!”

“It’s Gonna Be Alright”
When I wrote this song, I listened to all five Archies albums with the specific aim of writing one that sounded like an Archies song. One of the things I super badly wanted to do on this album was to link it to the original bubblegum-makers. I managed to track down Ron Dante, who was the vocalist on the Archies’ records. He was going to be in town at some point, so I explained to him what I was doing. And he said, “Yeah, it would be great to be on this thing.” Then I got bogged down with something else, and by the time I was ready to record his vocal track, he was back out in L.A. So I wound up having to do it slightly out of my vocal range. [Laughs.]

“Hot Sour Salty Sweet”
A friend of mine called me up one day out of the blue and said, “If you ever do the bubblegum record, I have a title for you: ‘Hot Sour Salty Sweet.'” And I said, “Yes, it’s genius.” I wrote it down and promptly forgot about it for four years. When I found it in my notes, right away it started coming to me, right there. Musically, that song and a couple of other tracks are specific tributes to Kasenetz and Katz, the guys who did the Lemon Pipers and all those bands that we commonly associate with bubblegum.

“Jump and Shout”
The “Yeah-yeah-yeah-yeah!” part probably couldn’t have been a more obvious tribute to “Mony Mony.” Not that Tommy James is bubblegum at all, but that period of his songs would definitely count as bubblegum, even though he predated bubblegum by a couple of years. “Mony Mony” has everything that a bubblegum song would have. It’s practically the template. As for the rest of the song, while I was researching for the album — which is basically listening to a whole bunch of records — I realized there’s not a whole lot of guitar solos in bubblegum. They weren’t really going for that. But they will go in for a drum lick, like a drum breakdown, in a middle of a song — a lot of them. I had to replicate that. I like drum breaks; I like disco and Latin music. I think it’s the only time on the record with a guitar solo. The solo that made it to the record actually was the test. We were trying to set up a decent recording level so I could record the solo, and wound up using that instead of going back and recording a decent solo. We just used making a bunch of noise on the test.

“Girl on the Carousel”
It’s an homage to Chad & Jeremy, who frankly I never listened to, but if you’re going to do a bubblegum record you kind of have to have that sort of syrupy ballad. Every album has one. As for the song itself, I have no recollection of how it came to me. It’s probably one of those songs that literally came to me in minutes as a sudden inspiration. Every single word of it popped into my head as recorded, which happens a lot for me. That song was the single most difficult song on the album to do because I couldn’t find an oboist. I got stuck on this thing where I had to have it in order for it to be proper Baroque pop, again sticking to the rules of the genre — it had to be an oboe. So it took me three months to find an oboist. We recorded it pretty easy, but those three months gave me time to do the rest of the record. [Laughs.]

“Hey! Cookie”
That was another Kasenetz and Katz tribute. The thing about bubblegum music is there’s a great deal of double entendre in it, especially the Kasenetz and Katz stuff — that was practically their stock and trade. Every song was a double entendre for clumsy backseat sex. In order to properly make a bubblegum record you have to start there, but you don’t have to necessarily end there.

“Sunshine Girl”
“Sunshine Girl” to the end of the record is actually one sort of suite of music. And that goofy noise at the end of the song is tied in to the rest of that piece. It was also the first song we finished recording, so it was the first we sent off to the record company, who immediately fired back an email saying, “Oh, this totally sounds like the Brady Bunch.”

“No More Rainy Days”
Years ago, I found some compilation of sunshine pop on the Internet. It wasn’t necessarily bubblegum, but it was this weird and very harmony-oriented pop music. It’s all stuff kind of like “Love Grows (Where My Rosemary Goes)” by Edison Lighthouse. It also had a lot of European bands. It wasn’t anything that Americans would have gone for in any real way. It was much too twee for the late ’60s, considering what America was going through. When I started making the album, I kept thinking about this compilation — I couldn’t stop thinking about it, and at some point I just gave in to the impulse to do a song that sounded like it, which is “No More Rainy Days.”

“We Come in the Sunshine”
Out of all the songs, that one has the least amount of bubblegum influences. It’s specifically inspired by Spiral Starecase, Brian Wilson, and Yello. I think Yello could have been a bubblegum band if it weren’t for the subject matter of their songs. They had all the trappings: the infectious musical hook, fantastic production values, super catchy, super bright and funny. The title was sudden inspiration. I was standing in the shower and, when it came to me, I cracked myself up laughing. I thought, “God, that’s the dumbest song title ever.” So I challenged myself to write a song using it.