The revealing, twerk-centric documentary you didn't know you needed 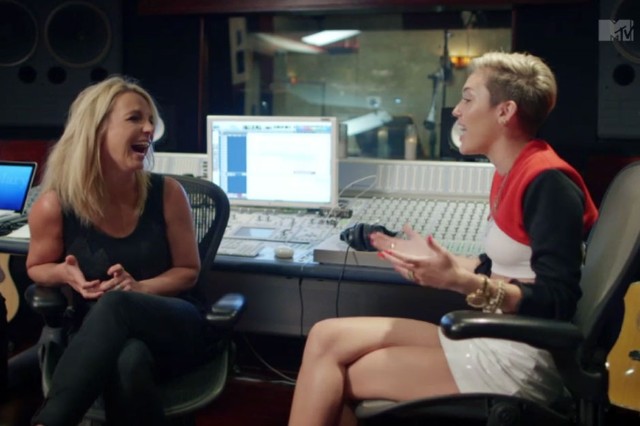 Perhaps you’ve already seen the Miley Cyrus film, the one back in 2009 that isn’t a documentary. In Hannah Montana: The Movie, a budding, underage pop star (Hannah, a.k.a., Miley Stewart) exhibits increasingly erratic public behavior in the buildup to her appearance at a major awards show in New York City — a narrative arc that is interrupted when Miley’s dad, played by Billy Ray Cyrus, forces her to return home to Tennessee to regain some perspective.

But as you’re surely aware by now, Cyrus’ real-life arc is even more extraordinary than Hannah Montana’s fictional one. A quick summary, for those of you competing on a no-contact-with-the-outside-world reality game show: Miley made it to the awards show, then there were twerking teddy bears, and now there is a made-for-TV documentary taking viewers behind the scenes of both this infamous 2013 MTV Video Music Awards performance and the three months that preceded it.

At the time, concerned citizens were asking how MTV could have let what happened happen, considering all the tongue-wagging, foam-finger-defiling, and racially charged spanking. Now, the answer seems clear: The network was playing the long game, selling us the spectacle and then, just when we thought we had moved on, the story behind it. Or, as Miley says herself in the introduction to Miley Cyrus: The Movement, “If people could see the details, they would know that this isn’t just some mess.”

The doc — which premieres on MTV this Wednesday at 10 p.m., and was produced by the same team behind similar features on Drake, Demi Lovato, Lady Gaga, and (most memorably) Nicki Minaj — shows its star to be remarkably self-aware, a showbiz kid who challenged herself because she wanted to be great, doing four hours of homework so she could do eight hours of dance and vocal work. Now that she’s a pop star — and no longer a mere kid who plays one on TV — Miley understands what being a pop star means, and can say things like, “The way I am about Britney, people are that way about me” without a trace of arrogance.

We even get studio footage of Britney Spears herself arriving to lay down a guest verse on the title track to Bangerz, Cyrus’ imminent new album. As if realizing for the first time that she is now a full generation removed from her pop peak, Brit cringes when Miley refers to the elder star’s Madonna-kissing and anaconda-handling VMA performances of yore as “when I got into music,” but nods approvingly when Miley continues, “People take the VMAs so seriously. I want to come out and shoot a hot dog gun.”

Though most cable-music docs turn on some sort of struggle that the star has to overcome (and though this particular star would call it quits with her never-mentioned fiancé shortly after shooting wrapped), The Movement presents an artist who is loving life and living it how she wants. (A philosophy she is now cheerfully broadcasting from the cover of Rolling Stone.) She has a vision that she’s set on executing, and nothing beyond the occasional sore throat seems to stand in her way. Even her responses to that VMA performance seem measured and knowing, if not a touch bewildered. “I’m coming out in pigtails, looking like a raunchy adult baby — that’s obviously funny,” she says. “If I was trying to be sexy, I wouldn’t have come out dressed as a bear.” She laughs, once again demonstrating that self-awareness. “How many times have we seen this play out in pop music?”

All told, the subject’s level of comfort in front of the camera (and the crew’s level of access behind it) makes The Movement not only timely, but genuinely watchable and entertaining. Meanwhile, Pharrell — Cyrus’ Bangerz collaborator who has been producing pop music since before she was born and Britney was even a teen (and whom Cyrus phoned when she was having doubts about shaving her head) —comes through with the defining quote: “Her dad is Billy Ray Cyrus, her godmother is Dolly Parton, and she grew up in the era when kids listen to hip-hop. People ask, ‘Why is she twerking? Why is she doing this?’ Because she’s a product of America.”