The Killers’ best songs have always sounded destined for a greatest hits compilation, and on November 11 that destiny will be fulfilled. The Las Vegas foursome have announced the imminent arrival of Direct Hits, a “best-of” that culls tracks from the band’s four studio albums (2004’s Hot Fuss, 2006’s Sam’s Town, 2008’s Day & Age, and 2012’s Battle Born). To sweeten the deal, “Mr. Brightside,” “Spaceman,” and “Miss Atomic Bomb” will be joined by two brand new tunes: “Just Another Girl,” produced by longtime Killer collaborator Stuart Price, and “Shot At the Night,” a synth-opera helmed by M83 mastermind Anthony Gonzalez.

Given both acts’ proclivity towards ’80s bombast and neon-purple tones, the team-up makes sense. In an interview with Radio.com last month, Killers guitarist Dave Keuning said the pairing came at the suggestion of their label, Island Records. “There was a mutual thing like, ‘Yeah we think he’s good. We’ll try him out,'” Keuning said. “It’s something we finally agreed with our label on.”

BBC Radio 1 premiered “Shot At the Night” on Monday (September 16), a day before it hits iTunes. Admire the space-age jewel — with its sparkling electronics, chest-thumping chorus, and “Midnight City”-reared percussion — via the above video.

Scroll down for the cover art and track list to Direct Hits. Aside from its standard 15-track format, the upcoming collection will also be available as a deluxe edition that features Battle Born‘s “Be Still,” a demo version of “Mr. Brightside,” and Calvin Harris’ remix of “When You Were Young,” and also comes with a documentary DVD. The vinyl edition of Direct Hits will be spread across five pieces of 10-inch wax. 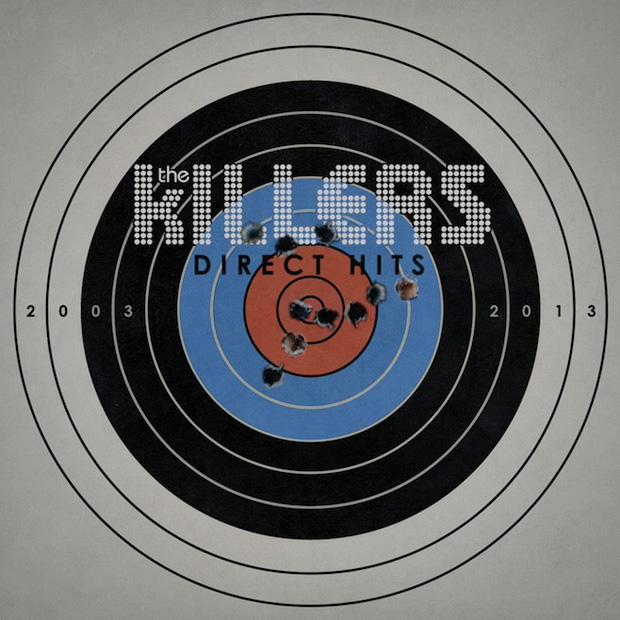