Who Charted? Keith Urban Edges Out the Weeknd, While Miley Cyrus Wrecks Everyone

Also, Lorde teams with Katy Perry and Cyrus to push Robin Thicke out of the top three 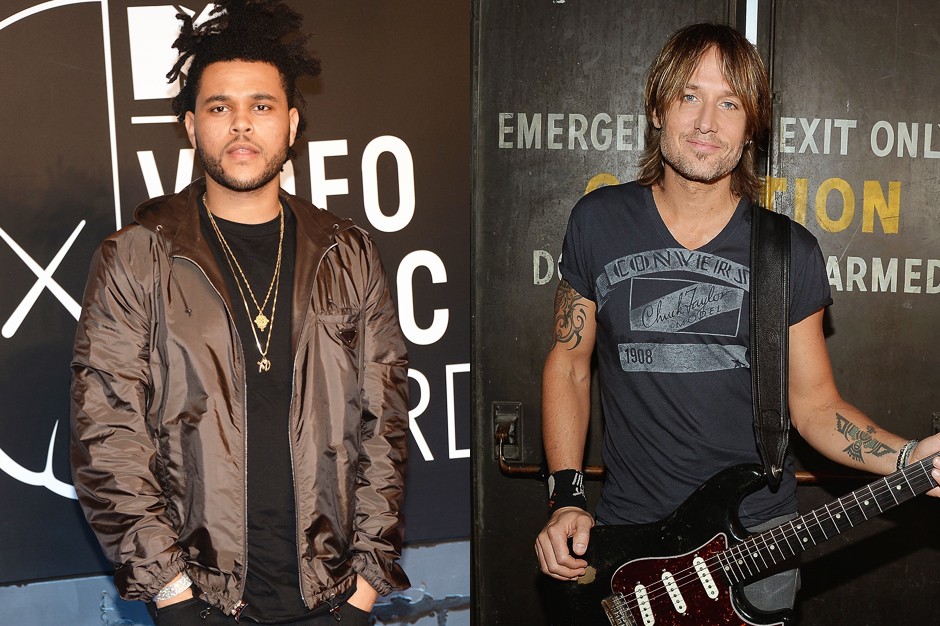 First! (and Second!) This week’s No. 1 slot goes to American Idol judge Keith Urban, but only by a nose. The pop country mainstay’s Fuse debuts at a fairly ho-hum 98,000, according to Nielsen SoundScan (via Billboard), which gives him a lead of fewer than 3,000 units moved over the Weeknd’s Abel Tesfaye. The latter’s Kiss Land arrives with 96K sold, which is a far bigger deal since it’s technically the alt-R&B lothario’s first album. His Trilogy EP compilation debuted at No. 4 last year, with 86K, whereas Urban hasn’t slung so few copies of anything since 2002’s Golden Road. One can only imagine the results had dead-eyed Tesfaye dipped into ABC’s The View instead of good old grinnin’ Keith.

3 to 10: Three more exciting debuts dot the remaining lineup. The 1 and only 2 Chainz is in at No. 3, and lest we 4-get (high 5!) his B.O.A.T.S. II: Me Time is “a hilarious and surprisingly poignant blockbuster” of a second album (63K). In at No. 5 is Janelle Monáe, whose The Electric Lady is a solid attempt at matching her sci-fi ambitions to her established pop smarts (47K). And No. 6 goes to Arctic Monkeys’ AM, a sleek slab of fidgety rock, Aaliyah fandom, and funky grooves (42K). The latter two nab their highest chart positions to date. Sheryl Crow also starts with Feels Like Home (36K), while repeats round out the rest: Luke Bryan, Crash My Party (No. 4, 53K); Tamar Braxton, Love and War (No. 8, 35K); Ariana Grande, Yours Truly (No. 9, 31K); and John Legend, Love in the Future (No. 10, 30K).

Wrecked: It’s too easy, but too warranted to ignore. Miley Cyrus’ ballad “Wrecking Ball” has utterly smashed its way to the top of Billboard’s Hot 100 songs chart. The song leapt from No. 22 to No. 1 following the release of the Terry Richardson-directed demolition fantasy that dropped on September 9, and subsequently set a new record of 19.3 million VEVO views in its first 24 hours. Thanks to that, the song jumped 1,565 percent in the Streaming category. Also: 275 percent in On-Demand with 2.8 million subscription plays. (That’s a record, by the way.) “Wrecking Ball” saw a 312 percent sales gain, and now holds a nearly two-to-one lead in overall chart points over the Hot 100’s No. 2, “Roar.” Katy Perry was queen of the jungle for a mere two weeks before “progress” came in and destroyed the habitat.

Lorde-ing Over: As in “over everyone else,” because the “Royals” star recently interviewed by SPIN isn’t close to abdicating her throne. That song tops Alternative Songs for the sixth week, making it the longest matriarchal reign thereof in history. Lorde tops Rock Songs for a third week, and comes in at No. 3 in the Hot 100. That, of course, makes her one of three women (beneath Cyrus and Perry) that are currently standing over Robin Thicke’s “Blurred Lines” (No. 4) — a turning of the tables considering his song’s initial success had much to do with a trio of naked ladies hired to prance around in his video.