With the release of Kathleen Hanna’s new album, Run Fast, by her new group the Julie Ruin occasioning multiple profiles by publications far and wide, including our cover story from early last month, we thought it might be an appropriate time to spotlight some lesser-known facts about the Riot Grrrl pioneer.

1. She was a karaoke host.
“In Olympia at a gay bar. My hostess song was the Clash, and another one to [Kool and the Gang’s] ‘Celebration’. It supplemented the Bikini Kill income, and other stuff I did. Like, living in Olympia, you only paid $100 for rent. So, if you made $100 karaoke hosting or DJing… rent’s covered! And then Bikini Kill paid for food. For my mozzarella sticks, which were my primary, go-to meal.”

2. Kim Gordon accidentally spoiled her birthday surprise.
“My 30th birthday was a surprise party, and the whole day I was crying because my mom didn’t call me, and I was just like, ‘She’s such a bitch, I hate her.’ And then I walked up the stairs to this sushi place and my mom and my aunt were there, and I realized she didn’t call me because they were on a plane. Adam [Horovitz] flew them in. But Kim Gordon kinda ruined my party because her and her friend were walking up the stairs to the sushi restaurant and they were late. I was like, ‘Oh, this is really weird, this is such a random restaurant, why would you be here?’ And then I was like, ‘Oh, it’s a surprise party!’ But I feel like that happens at every surprise party. Five seconds before you walk in, you’re like, ‘This is a surprise party.'” 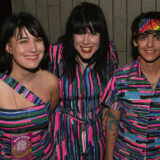 Le Tigre Roars Back for First Tour Since 2005

4. She believes archiving is a vital feminist act.
“We get erased. It’s not like people are talking about Babes in Toyland everyday, and yet they were hugely important to my band, and to a lot of girls who came of age in the ’90s. When are they ever mentioned as influences? To think of a band like that, or Mecca Normal, that was so big and important to so many people, it’s so easy to get erased if you’re a female artist. I’m really lucky that I’ve read a lot of feminist texts. There’s one about the way women get talked about as writers, all about erasure, and not having female heroes because they’re erased. I think in the age of the Internet it’s gotten a lot better, because you can find all this early stuff if you want, it but you have to get people into it, who are looking for that type of stuff. That’s a different challenge; how do you bring people to that archive? It’s saying, ‘My life is important. I saved it. I’m not throwing it in the garbage.'”

5. She regrets how women of color were received in riot grrrl.
“The thing that’s really complicated when I look back on riot grrrl and race, was, one, we had a convention in D.C. and I worked with a woman of color to come up with a syllabus for a workshop about racism. There were women of color there, and there were white women there, and it ended up being a lot of white women talking about how they felt discriminated against. It was really awful. I was really disappointed at the level of education about oppression that people had. I worked at a domestic-violence shelter and they talked a lot about race and class and intersectionality, and so I really got this education working there, and I know it’s stupid to assume that other people were educating themselves, at least reading bell hooks. And these girls hadn’t. I watched a lot of women of color walk out. I remember that woman [I collaborated with on the workshop] being like, ‘Oh, fuck.’ And I was like, ‘At least we tried this, and it was a failure, and there needs to be other things to try.’

“But I left. I was on tour all the time, and at a certain point, I had to decide, am I gonna be somebody who’s involved with riot grrrl as a youth movement, or am I gonna do this band? And I was like, I’m gonna do the band. I choose my art; I’m not a political organizer. I’m really proud that we were a catalyst for it, but I can’t be the leader. I need to pull back so that other people can step into this leadership role. When I did go to meetings in the PNW [Pacific Northwest] or different places, it sorta would be white women arguing about who was more racist in an all-white environment. And I was like, this is not productive, this is bullshit. I didn’t wanna be a part of that. But at the same time, when people say riot grrrl was all white, that’s not true. In places like New York and California, that definitely was not the case. I don’t want to erase the women of color who were very much a part of shaping the identity of riot grrrl, and who questioned riot grrrl as a very white movement, and in that way shaped it, because clearly they cared enough to critique it. Was the face of riot grrrl white? Yes. Were a lot of the drawings in the zines white? Yes. Did I do them? Yes. Do I regret some lyrics like, “Eat meat / Hate blacks / It’s all the same thing”? Yes. Because that’s not a smart way of talking about intersectionality, and I regret it. I’m willing to publicly say that because I think it’s important to be like, you can change, you can get smarter, you can get better. If anything, I live with somebody who did that very much in the public eye, and I think that’s a wonderful thing, instead of being some static identity, to be someone who changes publicly. I wanna admit that I’m not perfect, that I’ve made mistakes. We put ourselves out to be criticized, and I hope that people criticized things that I said, because it’s all about the exchange. Again, it’s not about being perfect, it’s about opening the conversation.”