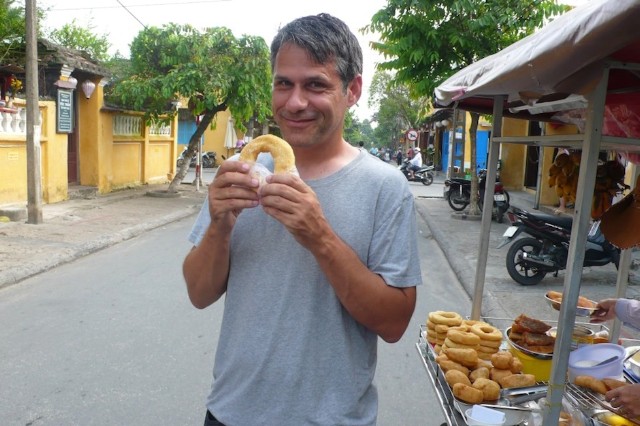 For Mark Trombino, it’s officially time to make the donuts. As a drummer for Drive Like Jehu and producer behind pivotal albums from Blink-182, Jimmy Eat World, and Rilo Kiley, among others, Trombino carved out an influential niche between pop-punk, emo, and indie-rock right around the millennium. On September 24, the same day Drake dropped Nothing Was the Same, the Los Angeles-based musician celebrated the opening of his newest venture: Donut Friend.

The donut shop in L.A.’s Highland Park neighborhood isn’t just a delicious, delicious side project. According to the Hollywood Reporter, Trombino hopes to start a whole new career in the donut-making business. This Donut Friend may be the first of a whole clique of Donut Friends.

Trombino’s new venture lets customers, um, customize their donuts with a range of fillings if they wish, but the real draw for music fans is the menu of music-related premade items. Confections include, yes, Jimmy Eat Swirl, along with Bacon 182, Jets to Basil, Chocolate From the Crypt, the Gorilla Biscuit, the Jelly Sound, Fudgegazi, Drive Like Jelly, GG Almond, and plenty of other punderful band names. Trombino’s fave: Rites of Sprinkles.

Was there anything in Trombino’s discography to predict his turn toward fried dough? Well, he produced Blink’s most famous song, 1997’s “Dammit”; guess “growing up” is starting a donut shop. He also produced Jimmy Eat World’s best-known song, “The Middle,” which we now know is a song about donut holes. Mmm… donuts.