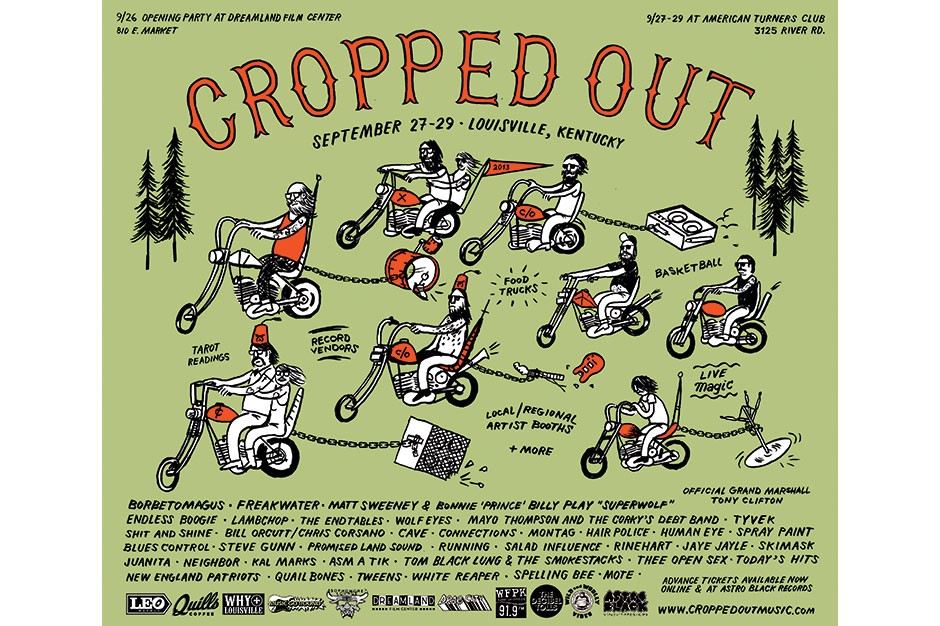 “The first one was hell on earth,” says Cropped Out co-founder James Ardery, recalling the inaugural edition of the DIY festival he and childhood friend Ryan Davis co-founded in 2010. “There was no staff. Imagine having 40 bands come down to your city and there is no staff. There were not even volunteers at that point. The first few years, my mom was the one taking tickets, our dads are pouring the beer for people.”

Since then, Ardery and Davis have grown their Louisville, Kentucky-based labor of love into a three-day celebration of their local arts community. The fourth installment of Cropped Out runs from September 27 to 29 and features three stages of live music, promising performances from Bonnie “Prince” Billy and Matt Sweeney (playing, for the first time, their collaborative 2005 album Superwolf in its entirety), Endless Boogie, Lambchop, the Endtables, Promised Land Sound, Human Eye, Mayo Thompson (who, also for the first time, is running through his beloved 1969 LP, Corky’s Debt to His Father), and many more, with legendary insult comic (and Andy Kaufman creation) Tony Clifton presiding over the ceremonies.

“I just figured he would do standup,” Davis says of Clifton. “And his booking agent was like, ‘What if he was more of the grand marshal, the MC of the whole festival and got up and introduced some of the bands and walked around giving people shit and taking pictures of people?’ We’re all about the interactive element of it, to add even more depth to the experience of the festival.”

Getting involved with and enlivening the Louisville scene was the original inspiration behind Cropped Out, which takes its name because, as organizers point out, “to be ‘cropped out’means to be marginalized, or to be left outside of the primary focus of something.”

“Ryan and I were spoiled,” Ardery says, referring to the pair’s background in DIY culture. “He helped run a space in Chicago, Ottoman Empire, for years and worked at Drag City and there is such a vibrant beautiful scene in Chicago. I have been booking shows at Death By Audio and 285 Kent [in New York], and they are great people. We want to bring that back to Louisville. We want people to understand that the only environment to get music doesn’t have to be this blown-out corporate jungle gym. It can be something that feels a little more natural and even a little safer. It feels more natural and homey.”

In keeping with Cropped Out tradition, an all-volunteer staff is helping put together this year’s event. Unlike previous editions, though, this version of Cropped Out will be the first to feature business sponsorships.

“This year we have sponsors, but only local sponsors,” Ardery says, “Because we made a point to not have, like, a Mountain Dew tent.”

“Another big name corporate music festival just isn’t needed,” Davis adds. “I think it’s just a waste of energy and resources. We didn’t start this thing because we thought we’d look cool if we ran our own music festival. We started this thing because we thought it was crucial and important to the community in which we grew up and that it was a necessary thing to have if we wanted to see results around the music community here.”

The fourth Cropped Out festival takes place at American Turners Club on September 27 and 28, with a separately ticketed wrap party planned at the Workhouse Ballroom on September 29. The kick-off event happens at the Dreamland Film Center on September 27 and will feature the debut of two films by Hisham Mayet, of Seattle-based collective Sublime Frequencies. Tickets can be purchased through the Cropped Out website.