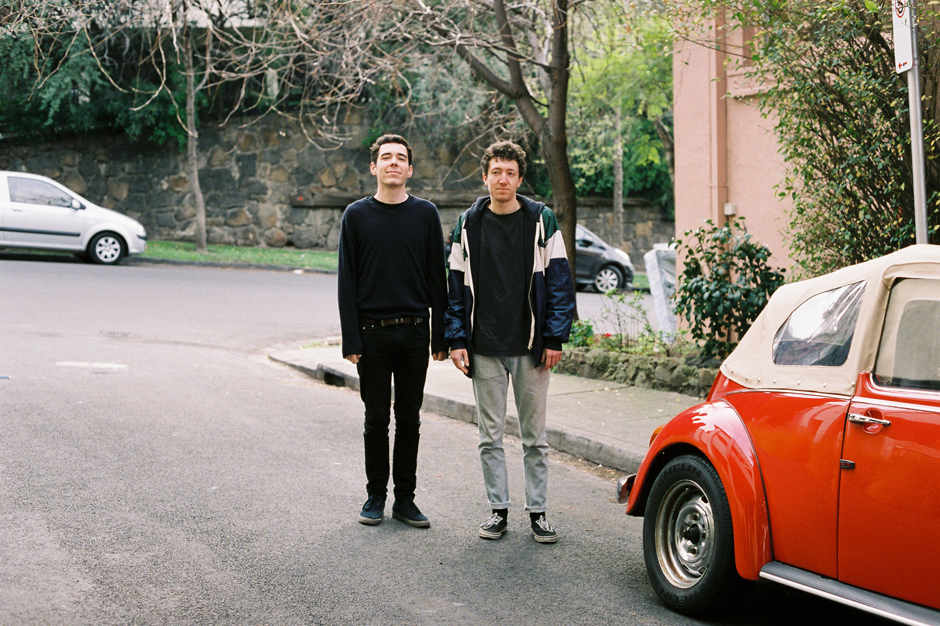 Naysayer & Gilsun, “All That Good Work” / “Blue” (Club Mod)
Interesting things are afoot over at Australia’s Modular Recordings — specifically, their newish sub-label Club Mod. The imprint’s first releases, in 2011 and 2012, didn’t stray too far from what you might expect from the club-centric offshoot of an indie label best known for acts like Cut Copy, the Presets, and Van She: Voguish, analoguish house and indie-dance jams fleshed out with remixes from underground-approved sorts like Diskjokke, John Talabot, and Axel Boman. Much of it is quite fine, but not entirely surprising. Now that seems to be changing. Pink Gin’s Blame Me EP, from July, touched on nervous electro-disco and dubby, busted acid house in a way that recalled prime Playhouse and current Cómeme. Roland Tings’ dreamy acid cuts “Tomita’s Basement” and “Cagean Sea” flashed back to the spring-loaded piano jacking of Sweet Exorcist’s great, underrated 1994 album Spirit Guide to Low Tech, while Junior Boys’ Jeremy Greenspan and Beautiful Swimmers’ Maximillion Dunbar made merry with the material in their own respective styles — Greenspan tunneling down a Balearic-trance rabbit hole, and Dunbar splitting the difference between hip-house shuffle and bucolic acid.

Which brings us to the Aussie duo Naysayer & Gilsun and their “All That Good Work” / “Blue” single. “Blue” is the slighter track. It’s pretty enough, full of sparkling synths and choral pads and gauzy vocal samples, but not entirely earthshaking, while Eliphino’s remix takes a serviceably beefy, sort of Joy Orbison-via-New Order approach that isn’t quite as transcendent as it wants to be; perhaps it’s the plonking bass line that holds it back. But N&G’s “All That Good Work” stands out plenty, despite the fact that there’s not all that much to it—just woozy organ chords warily circling each other over a bare-bones house rhythm, while vinyl hiss and indistinct voiceover lend suggestive vignetting to the edges of the frame. In its matte textures and moody reticence, it brings to mind Hamburg’s Smallville and Dial labels, so it seems appropriate that Dial’s John Roberts gets a turn remixing the song. And what a remix! The woody clatter sounds like a tower of Jenga blocks being stacked and knocked over in rapid succession, and while it’s not so far off from the diffuse beat studies of his recent album, Fences, there’s no pussyfooting here, just tough, eccentric funk like Gescom dusted in talcum. The main carryover from the original is a dusky organ chord, which Roberts gently buffs and stretches until it sounds like one of Jon Hassell’s elastic horn leads. The whole thing is as hypnotic as it is propulsive, and quite unlike anything else out there.

Strategy, “Return from the Stars” (Idle Hands)
Just like the bumper sticker urges, Paul Dickow has been keeping Portland weird for a decade now, developing a unique style of wonderfully homespun electronic music that intermingles elements of dub, Krautrock, house, and funk. He had a minor hit with his disco-driven “Super Vamp” way back in 2004, when most Portlanders were still furiously crossing their arms and standing stock-still at shows; then, a trio of albums for Kranky and Audio Dregs sounded like what you might get if the Orb built a wind-powered studio in an empty water tower on the slopes of Mount Hood. Last year’s wonderfully wooly Peak Oil, meanwhile, flitted between Aphex Twin and Afrobeat. A few years ago he confessed to me that he’d been having trouble getting European labels to put out his music; they seemed to feel it wasn’t polished enough for demanding dancefloors. So it’s refreshing to see that he hasn’t made any concessions on a new single for the U.K.’s Idle Hands label. The brisk, stepping “Return from the Stars” takes cues from German dub-techno giants like Maurizio and Thomas Fehlmann, but as with all things Strategy, there’s something profoundly organic about it; it’s easy to imagine the percussion being sourced from rainfall on a tin roof. The production inhabits that nether realm between hi-fi and lo-fi, where even the cleanest, fullest sounds seem cloaked in some strange stealth technology, but Peverelist’s remix strips it all back to next to nothing, just analog squiggles and tendrils of melodica wrapped around a skeletal garage beat — a reminder that dub is fundamentally an exploration of infinite reducibility.

Throwing Shade, “Mystic Places” / “Lights” (Ominira)
If Drake finds himself hard up for beats, he could do worse than hit up Throwing Shade, a London producer (and NTS radio host) who makes her debut on Kassem Mosse’s Ominira label. “Mystic Places” is all gothed-out R&B, like the Cure’s “Carnage Visors” given a jiggier beat and topped off with forlorn vocal samples that have been pitched up and rendered almost subliminal. The whole thing comes off like a clammier, rubberier Forest Swords, or the Weeknd jamming on a broken drum machine — spooky, gorgeous, and oh so desolate. The B-side’s “Lights” is even more ethereal, with spaced-out Juno pads, chimes, and a cappella scraps blending together and gathering force as they swirl down the drain. Forget PBR&B, this is 0PN&B.

Baba Stiltz, Our Girls (Studio Barnhus)
Sometimes, all you need is a loop. That’s triply true for Stockholm’s Baba Stiltz, a sometime skweee producer now trying his hand at seasick disco. “Our Girls” consists of little more than a hiccupping synth counterpoint and a rudimentary chik-chik-thump beat, but he manages to stretch it out into three subtly diverging tracks. The first version is the brightest and springiest, with watery-toned arpeggios fluttering out of phase in a way that recalls Nathan Fake or Luke Abbott. The other two variations explore what happens when the tape is slowed. The pitch dips, the edges get gloopier, and slapback delay begins to create subtle moiré effects; they sound like long-past-their-prime C60s unspooling into the maw of a greasy cassette deck. The only thing that’s missing is a fourth variation that would run the same track backwards (like the B-side of Sonic Youth’s Sonic Youth cassette), to really round out Stiltz’s meditation on chrome-based nostalgia.