Atoms For Peace Wiggle Through American Tour Kick-Off in Philadelphia 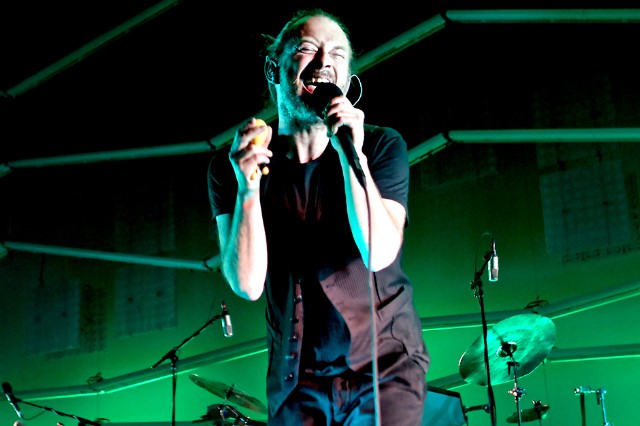 Not that they showed their age. The band loped through a breathless set and two encores, Yorke dancing like your drunk uncle at a wedding, Flea stalking the stage like a caged tiger. Veteran drummer Joey Waronker and Mauro Refosco rounded out a rhythm section that ranged between tight motorik and pounding jungle beats, and producer Nigel Godrich pulled back the curtain to work magic onstage, occasionally joining Yorke on guitar.

Yet for all the rock energy, one would be hard-pressed to tell the difference between Atoms for Peace and Radiohead. If you close your eyes you wouldn’t know this band was formed out of mutual appreciation for Fela Kuti apart from the odd saxophone barely audible over the squall. Atoms for Peace play with the same taut precision Yorke and Godrich have been wringing out of Radiohead for more than 20 years, swapping bouncy polyrhythms for teutonic drone. The band represents an outlet for Yorke and Godrich to explore new directions and reinvent themselves, but it feels too familiar to be “new.” Still, at a time when so many ’90s icons of are playing the nostalgia card with reunion tours and anniversary albums, it’s nice to know that guys like Yorke at least attempt to forge ahead.