Ariel Pink will score a forthcoming movie about hippie werewolves, naturally. The Los Angeles-bred avant-rockist and purported chillwave godfather is making his inaugural venture into the film world with Bad Vibes, a SpectreVision production. That’s the company formerly known as Woodshed, run by Elijah Wood and partners Daniel Noah and Josh C. Waller. Best of all, John Landis of horror-comedy classic An American Werewolf in London is signed on as executive producer.

Bad Vibes is set in the psychedelic rock scene of the late ’60s, where Sunrise Majesty is at the top of the charts with their message of “free love” for all. But after an encounter with a strange groupie, bandleader and mastermind Max Cassidy is left with a gift that can’t be cured with a shot of penicillin. Max has been touched with the curse of the werewolf, transforming him into a dark and brooding nihilist whose new sound is almost as disturbing as his new plan: to hold a huge love-in at the band’s ranch where he and the group will infect all their fans unless Cynthia, Max’s girlfriend and the last untouched member of the band, can stop them.

So, really, it’s a hybridization of the real-life stories of Jim Morrison, Mötley Crüe, and Charles Manson. Bad Vibes is written and directed by Dave Gebroe, whose credits include Zombie Honeymoon and, perhaps disconcertingly, something called The Homeboy. Casting is currently underway. Also, the film’s announcement came with a quote from Pink that anyone who has ever heard Pink speak will immediately dismiss as not actually having come from Pink, but whatever.

“The script totally blew me away with its horrifying revisionist take on the Sixties,” the Haunted Graffiti bandleader totally never actually said, at least not in those exact words. Or these: “It’s like a bizarro-world chronology of free love, dark psychedelic music and permissiveness gone hog-wild. My fans will get to hear a side of Ariel Pink’s Haunted Graffiti that no one’s ever heard before, and that couldn’t be more inspiring to me creatively.”

The full poster for Bad Vibes: 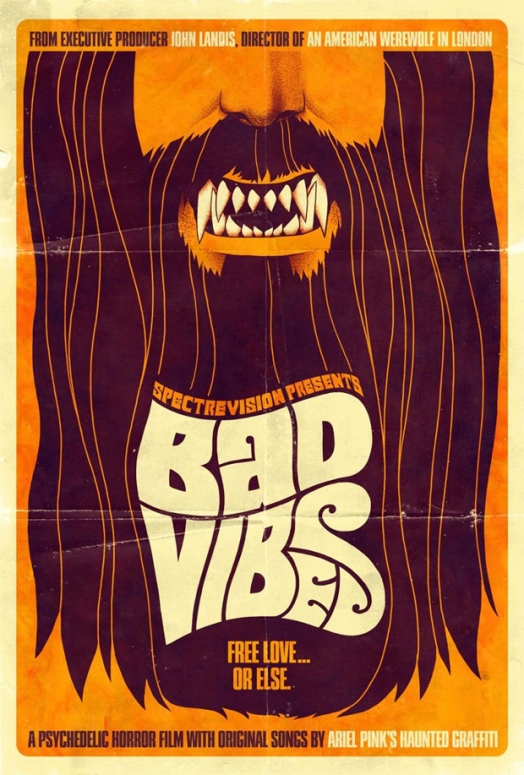