Ariana Grande’s ‘Yours Truly’: A Sweet, Sweet Fantasy of ’90s-Indebted Hip-Hop and R&B

Pop singer Ariana Grande is Broadway-brewed and Nickelodeon-trained. She has her eyes set on Mariah’s melismatic throne and possesses an ear that can reconcile 2013 radio rap tics with a retromaniacal streak, channeling it all into a tween-leaning, family-friendly pop sensibility. Her debut, Yours Truly — which sold more than 200,000 copies its first week out, and has yielded a Top Ten single with “The Way” — is one of the most assured albums of the year.

“Baby I,” the second single, has this moment when its Michelle Branch-meets-disco strings swirl in the background, and then lunge forward in concert with Grande’s vocals. She deepens her voice and buzzes, “But every time I try to say it / Words, they only complicate it.” All that assonance! Pure Mariah  vamping (done really, really well, mind you) for sure, but it also has some of Destiny’s Child’s impeccably on-beat sing-rap-singing in there, too. And right before that diva fusion? Booty-clap percussion and full-bodied, DJ Mustard-like synths arrive to propel Grande’s fast-rapped post-hook — which concerns telling a boy you like him while acknowledging that expressing such feelings is sometimes ineffable — into orbit. What. The. Hell.

Yours Truly is much less ambitious with its taste in rappers than it is with its use of hip-hop production: Milquetoast rap dweebs Big Sean (“Right There”) and Mac Miller (“The Way”) make appearances. But that says more about where the industry is in 2013 — and how rap, now that it’s fully absorbed into pop, has consequently gone smoothed-out and edge-less ,— than it does about Grande herself who is clearly looking back — no, yearning, really — for the ’90s, when hip-hop was pop but not squeaky clean, and when R&B (as in “rap and bullshit”) reigned supreme.

A few tracks here explicitly look back to the ’90s: “Right There” references Lil’ Kim’s “Crush on You” by using the same sample (Jeff Lorber Fusion’s “Rain Dance”); “The Way” grabs ahold of Brenda Russell’s “A Little Bit of Love,” just like Big Pun’s “Still Not a Player”; “Lovin’ It” has piano-house pounds that echo Mary J. Blige’s “Real Love.” It’s also worth noting that Big Sean and Mac Miller (and Fabolous, on a remix of “The Way”) are afforded two proper verses each on their songs — a minor detail, but that actively bucks the recent pop-music-machine trend that regards rapping as just one more thing to throw into every song for 30 to 45 seconds. 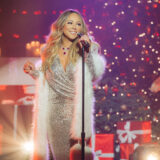 The mostly G-rated, sunny-R&B vision on Yours Truly — complete with straight-up 1950s making-out-and-only-making-out visions of courtship (see “Tattooed Heart” and “Daydreamin’”) — is bound to be contrasted with Miley Cyrus’ recent antics, but screw all that. What makes Grande different from all the twerk trolls out there — not to mention Katy Perry, and the other pop stars who nod to hip-hop for cheap cool points and nothing more — is that she effectively and organically finds a place for rap sounds. “Honeymoon Avenue” is a nearly six-minute epic full of trap-ready hi-hat skitters; “You’ll Never Know” has some fizzy West Coast funk-rap in its DNA. Grande is absorbing hip-hop because she wants to absorb it, not because she’s got to do it to stay alive on the Billboard charts — and most certainly not to add some menace, either, because this remains some of the most chaste popular music this side of a Christian station. Rap, pop, and R&B are legitimately interacting on Yours Truly. That’s pretty rare these days.