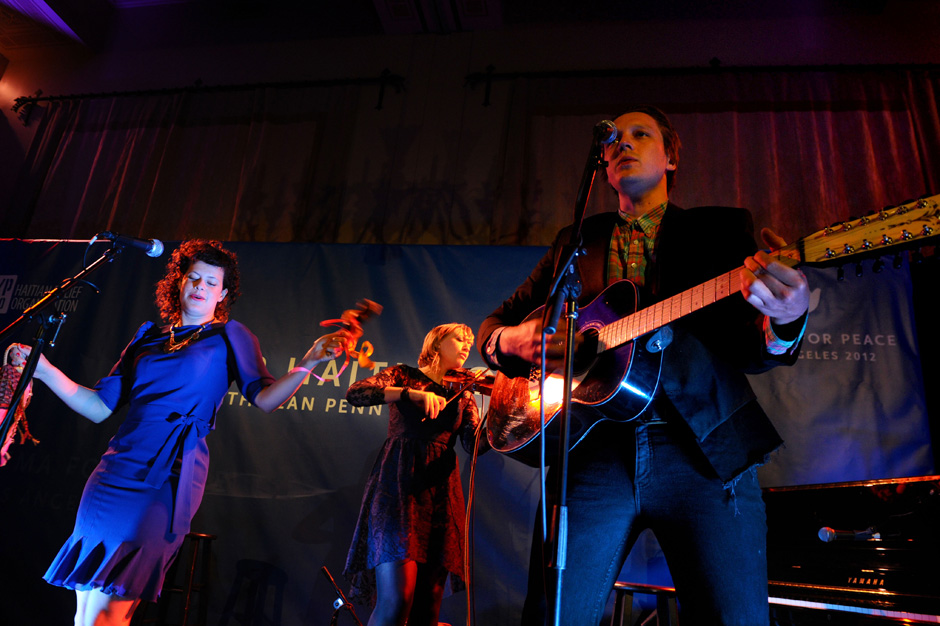 Arcade Fire have more surprises in store for their upcoming Reflektor album. In a recent interview with BBC Radio 1’s Zane Lowe, band co-leader Win Butler confirmed that the October 29 LP is indeed a double album that runs longer than 2010’s The Suburbs, mostly because the indie-rock titans have stretched their new material to epic lengths. Aside from the recently revealed, disco-inflected title track, Butler said there’s “a couple of other seven-minute songs on the record.”

The singer added: “Some of the stuff on here is going to surprise people. It’s even more different than [the single] ‘Reflektor.'” Butler also said that he and his bandmates whittled their latest album down from a collection of “50 or 60 songs.”

Regarding the exhaustive campaign of teasers, hints, and clues surrounding “Reflektor” and its super-shiny music video directed by Anton Corbijn, Butler said that Arcade Fire “don’t think of it as promo — it’s more of a weird art project.” On Monday, that “art project” yielded a Reflektor pre-order offer on the band’s official website. The long-awaited September 9 at 9 p.m. reveal came with a promise that early reservations would allow access to tickets for the group’s upcoming shows, including an eventual world tour.

That same night, Arcade Fire played reportedly yet another intimate set at Montreal salsa club Salsathèque. According to Stereogum, the band’s set consisted only of new material and featured eight songs, one of which sounded “like the love child of ‘Billie Jean’ and the very beginning of ‘Livin’ On A Prayer.'”

Speaking of Michael Jackson, in the chat with BBC Radio 1’s Lowe, Butler recalled the excitement he felt when he first saw the iconic video for Jackson’s “Thriller.” Drawing a parallel to what Arcade Fire hoped to accomplish with their “Reflektor” unveiling, he said, “I remember being a kid and my family watching the ‘Thriller’ video on the TV and it being an event and everyone was seeing it at the same time.”

Butler’s full interview with Lowe will air on BBC Radio 1 on September 11. Until then, prepare for the arrival of one of SPIN’s 50 Fall Albums You Gotta Hear by watching the official “Reflektor” video and fiddling with the song’s interactive short directed by Vincent Morisset. Reflektor is on the way via North Carolina super-indie Merge Records.