Some days the universe just aligns perfectly, ya know?

Last weekend during Steve Aoki’s set at Toronto’s Veld Music Festival, a wheelchair-bound dude named Ian McAdam was crowd-surfing in the right place at the right time to get hit in the face with an entire cake thrown by the DJ from stage. The hirsuite knob-twiddler’s career arguably peaked at the exact moment that the sizable dessert left his left hand and sailed some 80 feet into the crowd while the LED screen behind him flashed the words “FUCK” and “OFF!”

Thanks to TMZ — and more importantly, whatever future-seeing genius was manning the camera — we can watch the rectangular pastry fly end-over-end above the audience, miraculously remaining intact so much so that you can actually read the name of Aoki’s label (Dim Mak) written in the frosting before it connects with McAdam’s face. He was immediately mobbed by tank-top-sporting EDM bros, who rubbed frosting all over him while the beat pulsated on.

And while getting hit in the dome with a cake thrown by a DJ (a will.i.am collaborator, specifically) might be some people’s idea of a completely shit day, our hero couldn’t have been happier, it seems. Just check out the below photo from Aoki’s Instagram, which was accompanied by the caption, “This dude is a fucking legend! Crowd surfing to getting caked!! Love u man!” And he should. This could’ve easily gone just as poorly as Aoki’s ultimate trampoline fail.

Believe it or not, a great deal of planning goes into the man’s cake-tossing, as he explained to VIBE at Lollapalooza.

“We have to make sure the cake is soft, fluffy. The crowd knows what to expect, especially the front row. Whoever makes the biggest sign usually gets the cake. I’ve hurt my shoulder throwing cakes this year. I’m not kidding. So I’ve had a physiotherapist work on my shoulder every show to like fucking get it prepared and ready, because I’ve thrown it out,” said Aoki before having a quiet revelation. “It’s like I’m a pitcher now, as well as a DJ.” 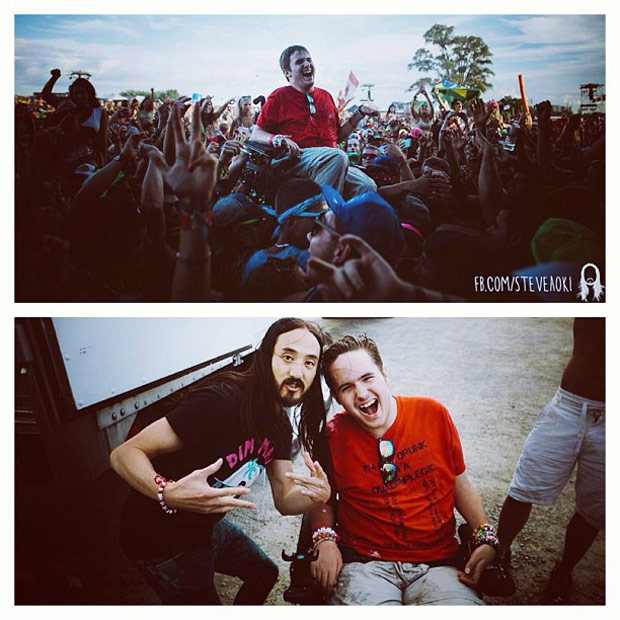