?uestlove may not have been frisked recently, but he has been stopped. Often. Since 1994, a year after forming the Roots, the drummer estimates the times he has been pulled over or detained by authorities number “in the twenties and thirties.” He reflected on his experiences with police in an interview this week for nonprofit news outlet Democracy Now! (watch below, via Rolling Stone) following a New York judge’s ruling that NYPD stop-and-frisk tactics violate the constitutional rights of the city’s minorities.

“I get stopped all the time,” the man born Ahmir Thompson, 42, said. He called the experience “absolutely probably the most humiliating, lowest, lowest feeling a human being can have.”

Thompson’s earliest memory of a police stop was in 1987, when he was riding in a car with a friend after Bible study, brand-new copy of U2’s The Joshua Tree in hand. The most recent was two or three weeks ago, when he and his driver were about to cross the Williamsburg Bridge after his DJ night at Brooklyn Bowl; ?uestlove said he showed police his memoir, Mo’ Meta Blues, to establish why he was sitting in the backseat “like a don.” And the worst incident, ?uestlove recalled, was a few years ago when he went out on an errand in Orange County with actress Jurnee Smollett-Bell.

“I pulled over to take a phone call from my manager, because, you know, I thought, being a law-abiding citizen, you’re not supposed to drive and talk,” he said. “So I pulled over, talked, finished the conversation, pulled off. Five cars stopped us, and pretty much that was like the — that was the most humiliating experience, because, like, we had to get out the car.” He added that police made them spread against his car and seated them in the back of the police cruiser while searching the vehicle. 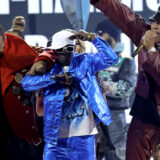 ?uestlove has been vocal about the suspicions he has experienced directed toward him as an African-American. After George Zimmerman’s acquittal in the shooting death of Florida youth Trayvon Martin, he wrote a widely discussed Facebook post about the subject. “The overall message this whole Trayvon case has taught me: You ain’t shit,” the post says. Asked by Democracy Now about the post, he said, “I identified with Trayvon Martin, like I felt like, OK, that would have been me in that situation.”