Portland super-duo Quasi are celebrating two decades of making music together by releasing Mole City, a so-called “Encyclopedia of Kicking Ass,” on Kill Rock Stars come October 1. You’ll know drummer Janet Weiss from Sleater-Kinney, Wild Flag, and the Jicks, of course. And singer/multi-instrumentalist Sam Coomes was a member of Elliott Smith’s Heatmiser and contributed to Figure 8, as well as every Built to Spill album since 1997. Together, they’re headed toward album No. 9, an honor that’s now marked by the release of “See You on Mars,” a noisy little rock-pop gem that features bounding bass, a little bar room piano, impassioned vocals, and a powerful backbeat. 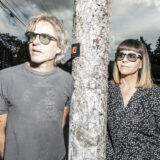