Joy Division Outtake Reel Rescued From Trash, Up for Sale 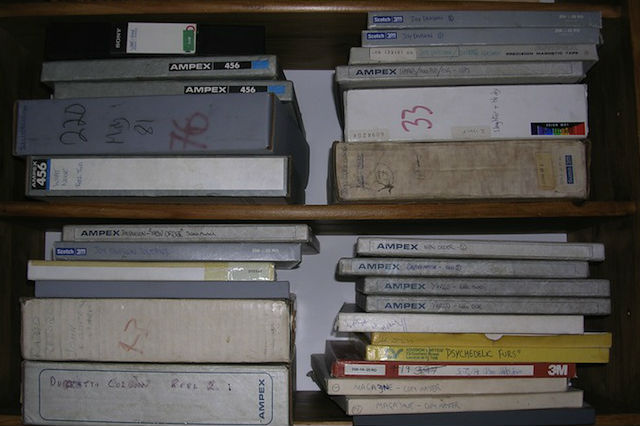 Despite their years of fighting, you’d think the surviving members of Joy Division would at least be interested in seeing what’s on a batch of their old tapes rescued from a trash bin. According to Slicing Up Eyeballs, Julia Adamson — a former member of the Fall and ex-assistant to Unknown Pleasures and Closer producer Martin Hannett — revealed that she’s in possession of a trove of reel-to-reel tapes, including Joy Division outtakes, a copy of the Unknown Pleasures master, a New Order tape, and much more. Now she’s looking for someone to take the salvaged gems off her hands.

After posting a picture of the tapes on Facebook, Adamson said she contacted the band members but they’re not interested, especially crotchety bassist Peter Hook. “He’s not a happy bunny,” she wrote. “Tried the other band members, too, to no avail, and the record companies… I have looked after these tapes for a long time and when I approached the artists (who were my first port of call) I was subjected to accusations and abuse… so I don’t really care anymore. I know they are worth something to a collector… and good luck to them. The quality of Unknown Pleasures far surpasses the mastering from vinyl over the years (they lost the master tapes long ago… these are copy masters… and outtakes… that I assure you are quite splendid).”

Adamson later amended what she said, without naming names: “I should rephrase that to ‘one musician’. He is trying to intimidate me (and I think he would have preferred the tapes to be in a landfill). Fortunately the record label are now on the case. The rest of the musicians are AMAZING x.”

As for why Adamson is selling the tapes, which also include reels from Psychedelic Furs and Magazine, the reason is simple: She says they’re likely deteriorating and she wants someone else to take care of them. She hasn’t named a price, but encourages any interested parties to send her a message on Facebook. But buyer beware: Just because you own them, doesn’t give you the right to make any money by releasing their contents.

For a closer look at this stash, feast your eyes on this high-res photo.