“The art world, like the business world, is extremely white and scary.”
“But Jay Z can handle them both.”
“Damn. I wish I was Jay Z.”
“That’s what he wants, man. That’s how he gets you.”

How do you make people care about a music video in 2013? Jay Z and Mark Romanek would say, “You stop calling it a music video.” There was a time when the Magna Carta Holy Grail marketing campaign was more of an event, the focus more on its method of release than the songs it contained. And tucked somewhere in said campaign was a six-hour performance-art piece at the Pace Gallery in New York’s Chelsea district, where Jay repeatedly ran through album highlight “Picasso Baby.” On Friday night, after appearing on HBO’s Real Late with Bill Maher, he premiered his new Romanek-directed short documentary film on the subject.

In Samsung ads for the record, you can hear Jay talking about the album as an event. He wanted people to be able to listen to it in one sitting, across the world. He was able to transfer this idea to the visuals as well. The pinnacle of a music video as the sort of event that prompts the world to stop what it’s doing to watch visuals set to song — pretty much the goal for any artist in terms of music videos — is Michael Jackson’s “Black or White.” While that was on a much larger scale (premiering on network television during prime time), Friday’s televised premiere of Picasso Baby was still reminiscent of that historic event.

One would be hard-pressed to find recent discussions of performance art that don’t mention Marina Abramovic. You could thank her — or blame her, depending on how you look at it — for the genre’s increased profile of late, with celebrities like Milla Jovovich, James Franco, and Tilda Swinton echoing her style. In large part, this film reads like an “I <3 U” note from Jiggaman to Marina: She appears in the film 13 times, far more than anyone else, saying things like, “So much energy — it’s hot” and referring to music as “the most immaterial part of art.” (Marina <3 Jiggaman, too.)

The documentary finds Jay Z performing the song to several different people — sometimes a celebrity or someone from the art world, sometimes a fan — each one at a time. The song essentially contains two parts. The first two verses are filled with references to artists like Rothko and Koons, and museums like the MOMA and Tate Modern, but the song’s often-overlooked second half sounds angrier, and deals with crime and punishment: “My Miranda don’t stand a chance with cops.” In the film, during that second part, the barrier between the crowd lined up around the walls and the room’s center — Jay and his audience of one — is broken, and everyone rushes towards him. In every interaction, including the forehead-to-forehead greeting with Abramovic, Jay seems at ease. He has an infectious smile.

Parts of me don’t want to like this man and what he’s come to stand for as of late — his recent comments on his presence alone being considerable “charity” for the youth come to mind — but his charm is undeniable. Many people’s preconceived notions of hip-hop, built on stereotypes of black males, are offensive. Often they can’t praise any aspects of hip-hop without backhandedly shunning other aspects. Instead of “Jay’s performance-art video was enjoyable,” it becomes “I like Jay because he’s not just rapping about bitches and hoes,” as if all hip-hop is sexist, materialist trash and there are no socio-economic conditions that contribute to the collective conscience that makes room for misogyny and materialism in that art. In fact, in a recent interview, Romanek does mention a stereotype they were trying to play with, that of the “tough-guy street-rapper cliché.” Jay is also putting a newer, younger audience onto performance art and fine art in general. In one scene, a smitten fan yells at the camera, “You made yourself art. That’s amazing.”

At the beginning of the film, Jay speaks about energy and the flow of energy, about taking energy from crowds and figuring out what to do with it. “Today, it’s kind of an exchange,” he says. “There’s somewhere to drop it back off.” This Jay Z guy has some personality. Ultimately, that’s what you walk away thinking, yet again. That’s the grand statement: It’s about his charm and his energy, not the very simple idea that this “tough guy” or “ex-drug dealer” can namedrop Andy Warhol. 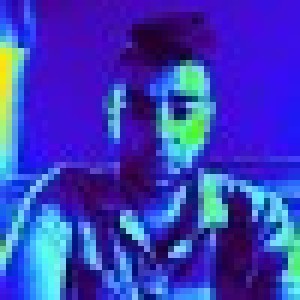