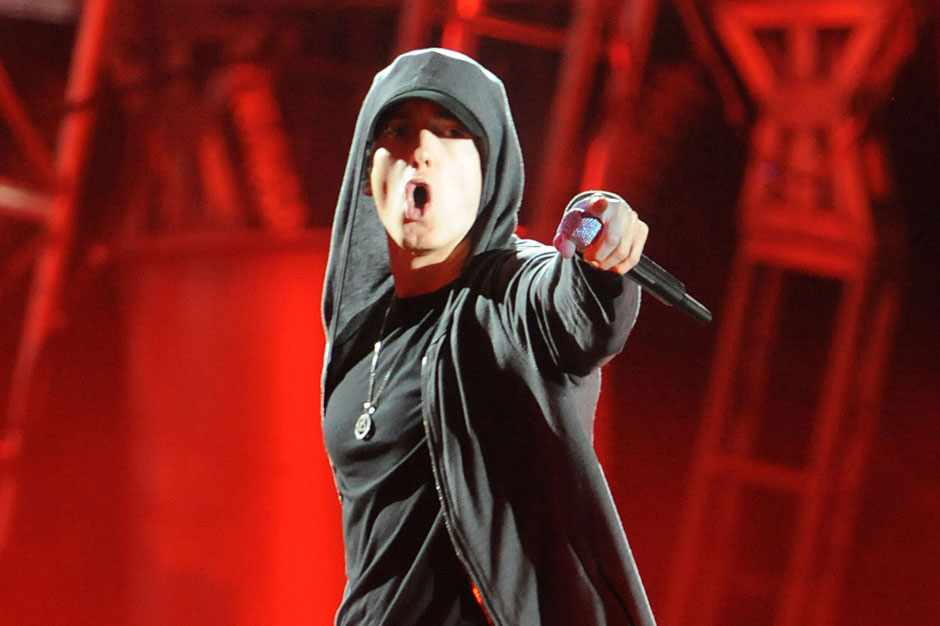 The arrival of a new Eminem song just one day after Kendrick Lamar’s gauntlet-throwing tirade of a verse on Big Sean’s “Control” is unfortunate. Kendrick and “Control,” just by existing, loom heavy over “Survival,” which premiered by way of a trailer for Call of Duty: Ghosts and is set to appear on a new Eminem album out this fall. There’s already plenty of Marshall Mathers in Kendrick’s delivery (“Backseat Freestyle” peaks when Kendrick does a deep-voiced grunt that sounds very Em-like), and the climax of “Control” veers into a familiar all-over-the-place style, especially those vivid, ridiculous final lines: “You better off trying to skydive / Out the exit window of five G5’s with five grand / With your granddad as the pilot, he drunk as fuck trying to land / With the hand full of arthritis and popping prosthetic leg / Bumpin ‘Pac in the cockpit so the shit that pops in his head.” As a result, the quote-unquote passionate rapping from Eminem here (“Wasn’t ready to be a millionaire, I was ill-prepared / I was prepared to be ill though / The skill was there”) will just make you wanna put “Control” on again, whether you think Kendrick knocked out the verse of the year or not.

At least “Survival” isn’t a Slim Shady refix of “Control.” We’ve already endured a dozen or so of those, and it’s clear that attempting to top or even append any ideas to Kendrick’s landmark is a waste of time. “Survival” is, like most Eminem songs post-Relapse, a mix of feverish and technically good rapping, warmed-over 8 Mile platitudes about struggling and overcoming, loud-quiet-loud production that nods to weathered hard rock and the emo histrionics of dubstep/EDM, and a wraith-goth hook from, in this instance, Skylar Grey. It’s all so embattled and goddamned serious, and yet here, playing in the background of the trailer for a video game, it deliberately seems incidental, like it’s not really supposed to matter all that much.

Surely that’s just the result of its marketing plan, but it might actually be the smartest way to hype a new album in the wake of Kendrick dominating the hip-hop conversation. You hide the track behind uncanny-valley images of war, and make it tough to hear thanks to all the digital explosions and gunfire. Later, it’ll show up on a website minus the ersatz chaos, for the listeners who really care. And unlike awkward corporate-crossover moves like Justin Timberlake and Bud Light (or Jay Z and Samsung), Eminem teaming up with the Call of Duty empire actually makes sense: That’s probably his core demographic right now.

A new Em song would be the main event on any other week. But given both the “Control”-saturation context and the odd delivery system, this one feels like no big deal. And ultimately, that’s a much better look than the already dozen or so rappers wanly responding to Kendrick’s call to arms; it’s K.Dot’s, week and even a new single from one of the most popular rappers of all time can change that fact.