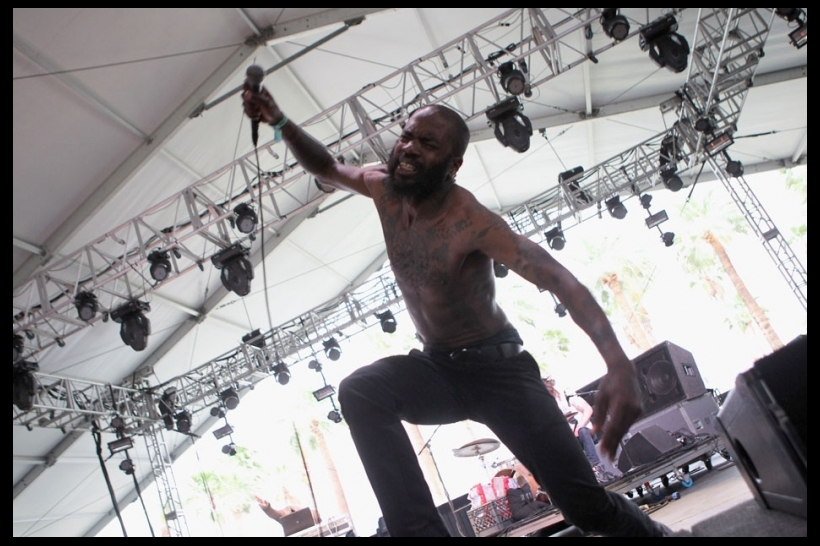 Artist of the Year Death Grip  dropped out of their Saturday Lollapalooza set, following a no-show at an official festival afterparty show on Friday night (August 2) at Chicago’s Bottom Lounge.

While last-minute cancellations aren’t rare in the music world, Death Grips added a mysterious twist, hanging a backdrop on the stage that appears to be a suicide note written to them, according to Consequence of Sound. The note reads:

I am ready to take my own life. Many bad experiences led me to this dark void that I am locked in. Maybe by my own hands? I don’t really care anymore. I just wanted to say thank you for showing me the other side. the side that is locked away deep inside a person. I am mad. Mad all the time and depressed all the time. I can’t take it. I’m not afraid of dying but i am afraid that I can’t hear DG in the after life if there is such a thing. I don’t know, but I hope your music transcends to the unknown. A place where DG’s essence exists. A place where art exists. I love art. That’s the one thing that kept me alive? this long. So just to ease minds, DG didn’t “influence” me to do this. this is my own fucking choice. but thanks for making my life a little better. you’re my absolute fave and I will fight the gods if they don’t allow me to follow DG’s efforts can’t see Earth. Anyways, continue doing great things. I love you Stefan, Zach, and Andy.

I will be watching.

A fan video shows a Bottom Lounge staff member taking the stage and saying that the concert was canceled because Death Grips decided not to show up, adding “fuck them” at the end of his announcement. Fans then reportedly took to the stage to demolish Zach Hill’s drum kit.

“They chose not to arrive in Chicago,” said Lollapalooza spokeswoman Shelby Meade. “Bad Things are stepping up and headlining Grove Stage tonight.”

Bad Things includes Olympic gold medalist Shaun White on guitar. Death Grips have yet to announce an official reason for their cancellation.