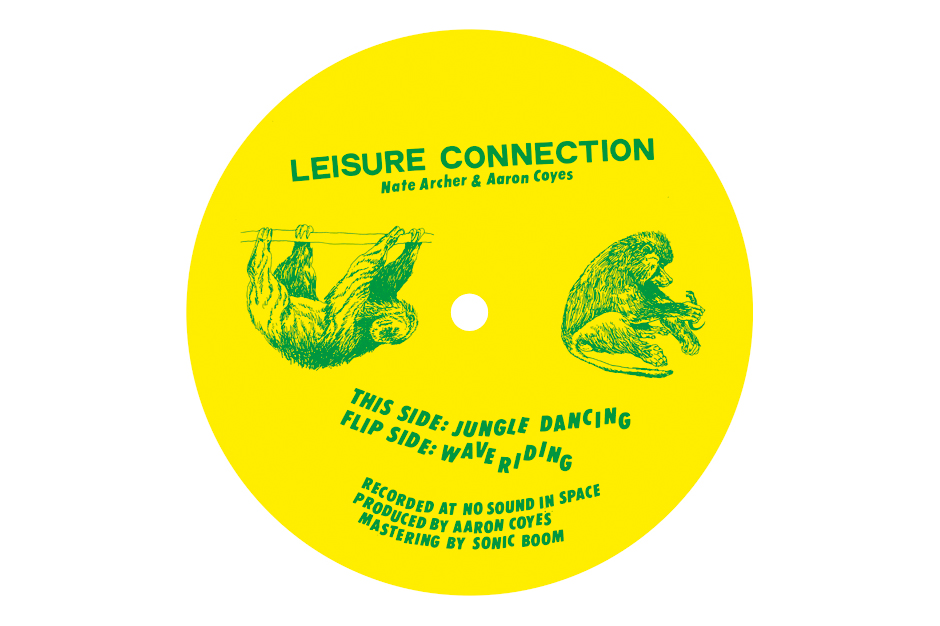 Leisure Connection, “Jungle Dancing”/”Wave Riding” (No ‘Label’)
The oddly named No ‘Label’ is a vinyl-only offshoot of Amsterdam’s Rush Hour; they might just as well have called it No ‘Sound,’ given that the imprint doesn’t have anything like a sonic hallmark. Across Stellar Om Source’s opalescent electro, Aardvarck’s apocalyptic rave anthems, and Willie Burns’ psychedelic homage to Native American cultures via his Black Deer alias, eccentricity remains the only common denominator. And so Leisure Connection’s “Jungle Dancing” is a springy mechano-disco jam with all the dubby weirdness you might expect from a project with ties to the echo-besotted nocturna-poppers Peaking Lights. (That group’s Aaron Coyes makes up one half of Leisure Connection; the other is Nate Archer, also Coyes’ partner in the duo Rahdunes.) The fluttering “Baba O’Riley” riff that opens the track quickly gives way to a lanky drum-machine groove that’s all stray elbows and bonging steel drums; redolent of outmoded machines gathering mildew in dank basements, it brings to mind Beautiful Swimmers or Maxmillion Dunbar’s quixotic disco. Nominally four-to-the-floor, the beat is far squirrellier than your typical club track: No two bars are alike, and the way phrases evolve and peel away suggests sound-sculpting at its most tactile, four hands in constant contact with delay pedals and a mixing board. Whereas B-side “Wave Riding” sounds, improbably enough, like some insane three-way collaboration between Ricardo Villalobos, El Guincho, and Omar-S. Nearly 13 minutes long, it’s a riot of tropical percussion and equatorial color threaded with a naïve melodic sensibility that conjures visions of jumping rope beneath coconut palms. Oh, and it’s mastered by Sonic Boom, so you know it sounds amazing. This is one of the most exciting records I’ve heard this month, and it’s selling out quickly — get it now or regret it later.

Warlock, “Too Late” (Frijsfo Beats)
If you were going to invent a dance routine to go along with this, it would probably involve lots of sliding and scooping, maybe a little popping and locking, and definitely something where you swivel your head like an owl — a few rolling-dice hand gestures probably wouldn’t hurt, either. It’s curiously kinetic, this breakbeat acid cut from the U.K. rave veteran Warlock, head of the Rag & Bone label. The furiously controlled bursts of energy on “Too Late” are pure jump-up, to borrow an old term from drum and bass; flashing from breaks to congas to wriggling 303’s, its structure is pure jump-cut. It doesn’t so much develop as teleport in stop-time across subgenres generally thought to exist on parallel planes; with every flash of the strobe, you find yourself standing in a different place. The sampled shouts look to vintage hip-hop; the dripping sine-save melodies are a wormhole leading back to Sheffield bleep classics like Tricky Disco’s “Tricky Disco” and LFO’s “LFO.” Deep in the background, framed against claustrophobically tight delay, a voice intones, “Too late.” In other words, hardcore will never die, but you will. Rave while you can.

DJ Q, “Big” (Q Bass Trax)
DJ Q’s upcoming single “Let the Music Play” finds him setting Louise Williams’ R&B vocals against a feathery bed of filtered chords in a way that’s directly indebted to Daft Punk and Todd Edwards. It’s just the latest example of the producer pushing bassline house, a Northern variant of garage, into new stylistic contexts. Before that, there was jungle (2012’s “All Junglist”), and on last year’s “Brandy & Coke,” he reworked a Brandy a cappella into a spot-on pastiche of millennial 2-step. (His recent remix for Mobb Deep’s Prodigy is another pitch-perfect garage throwback.) With its stoking FM low-end, so charged with harmonics that it practically glows, his new single is the most purist bassline track that he’s made in a while, but what really makes the tune sing is the G-funk sample lurking beneath the bass and drums. Gloopy with portamento lead and rich chords, it’s the perfect counterpoint for the track’s stern, tough exterior — soft, squishy, begging to be tickled.

Nigga Fox, O Meu Estilo (Príncipe)
Last April, Lisbon’s Nigga Fox released a mixtape, also called Meu Estilo (“My Style,” in Portuguese), that was heavy on his original productions; five of those tracks now appear on this EP from his hometown’s Príncipe label. For genre insiders, this may or may not be par for the course, but for the rest of us, it’s likely to sound thrillingly alien. Our host (who also goes under the alias Lx Monkeys Beatz) uses batida, an instrumental offshoot of kuduro, as his rhythmic base; everything here thrums with weirdly tuned drums and twisted polyrhythms, loping hand percussion snaking around powerful 909 snares. But his rubbery synthesizers have more in common with house and techno: The fat bleats and cool bleeps of “Powerr” are mutated descendents of Mr. Oizo’s “Flat Eric” and Sheffield bleep, while the seasick arpeggios of “WeeD” don’t sound too far off from the skunkier end of what Rush Hour has been putting out lately, Hazylujah especially. Part of what makes Nigga Fox’s style unique is his habit of slipping through the gaps in standard tuning, smothering Western intonation in a thick blanket of tuned percussion and queasy synthesizer tones. On “O Badaah,” pitch-shifted strings are set against woody congas in a way that suggests Arnold Schoenberg sitting in with a drum circle. “Hwwambo” slathers melted accordions over the EP’s most propulsive rhythm, while “So Nos 2,” an example of the Angolan/Portuguese style called tarraxinha, slides the tempo fader down below the 100-BPM mark, dripping New Age flutes over stuttering roto-toms. Moombahton wishes it were this trippy.

DJ Funk, “Three Fine Hoes” (Sinjin Hawke)
Despite the robot voice singing, “Three fine hoes” towards the beginning of the song, you could easily fail to realize that this remix from the Canadian-born, Barcelona-based producer Sinjin Hawke has anything to do with a ribald ghetto-house track by Chicago’s DJ Funk. The original, released last year on Paris’ Booty Call Records, is a gnarly acid workout full of evil laughter and bawdy exclamations (“Balls in your mouth!”); something about the grit and warble in the singer’s voice recalls, however improbably, Jello Biafra. (The minor-key bass line lends to the punk-rock déjà vu.) Hawke’s version is just as tough, especially in passages of thundering footwork rhythms and chopped-up vocal outbursts. But instead of the gutter, Hawke focuses his gaze on the stars: majestic horn fanfares, celestial choirs and chimes, and a melodic lead that sounds like the child singer from The Cook, the Thief, His Wife, and Her Lover. As far as ghetto house goes, it’s uncommonly redemptive.