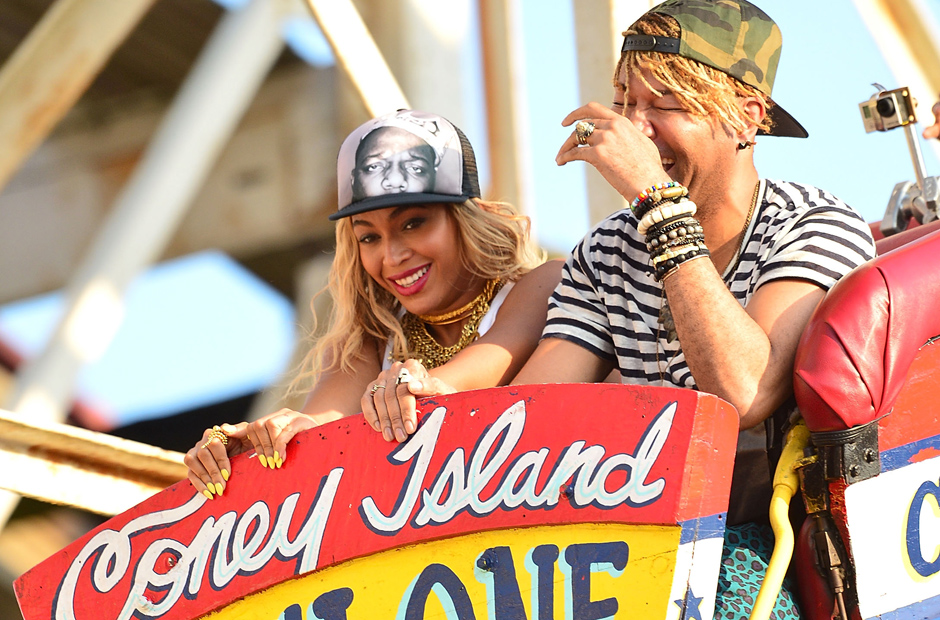 Beyoncé surprised visitors to New York’s Coney Island Thursday when she showed up to take a spin on some of the historic amusement park’s signature rides. Her entourage included stylist Ty Hunter and (in)famous photographer Terry Richardson, plus at least one GoPro cam, fueling speculation that she was there to shoot a music video. In the various photos that have emerged, she’s seen waving to fans, shaking hands, and even, yes, holding a baby.

The most widely circulated images from the day show Queen Bey grinning (or gritting) while riding the iconic Cyclone, but her presence wasn’t a day in the park for everyone, no. The New York Post, as is its wont, is telling a different story — that of Dorris Hone, 47, an unsuspecting Ferris wheel rider brave enough to stow her agoraphobia for one quick run at the old Wonder Wheel. But thanks to Mrs. Knowles-Carter, she wound up trapped on top, terrified.

Evidently the ride’s operator stopped the wheel for about 30 minutes in order to empty out a handful of cars and replace the riders with Beyoncé and her crew. Hone wound up stuck at 150 feet and, as a friend who understandably chose to go unnamed noted, “was screaming at the top of her lungs, ‘Get me off this ride!’ She was just hysterical up there.” But as the Post masterfully adds, “with all the crazed Beyoncé fans down below, no one could hear Hone’s screams.”

While other outlets were dazzled by the singer’s blonde bob, Notorious B.I.G. hat, and shiny accessories, one brave publication was on the scene getting the real scoop. As of press time, Hone was still waiting for an apology from the supposedly “Grown Woman.”