In 1993, one LP launched an era so problematic the band spent its entire next era apologizing for it... 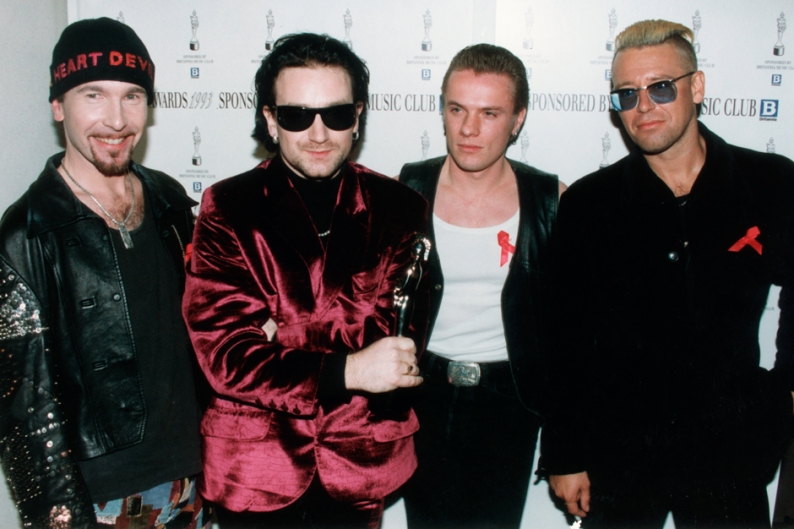 You know you’ve made it as a Serious Rock Band when an entire years-long phase of your career is so problematic that you spend a subsequent entire, years-long phase of your career apologizing for it. So let’s begin at the end, shall we, with U2’s apology, which we can date to a February 2002 Time magazine cover story with the headline (brace yourself) “Can Bono Save the World?” (It wasn’t a sarcastic question, by the way — this was post-9/11, and thus post-irony.)

With that, their staggering comeback was complete: 2000’s All That You Can’t Leave Behind, a massive back-to-grandiose-basics success; a triumphant 100-plus-date tour, culminating with their 2002 Super Bowl halftime set — unafraid to play the 9/11 card, down to the backdrop crawl of the victims’ names and Bono’s climactic American-flag-as-jacket-liner reveal — which was a genuinely moving and cathartic career peak. That American flag jacket made the Time cover, in fact. The piece’s opening line: “Bono is an egomaniac.” Its climactic quote: “[We’re] reapplying for the job. What job? The best band in the world job.”

But to stage such a ferocious comeback, you’ve got to fall off. Which brings us to Zooropa …

U2’s eighth album turns 20 years old today. Its parents won’t be throwing a lavish party or buying it a Camaro. No: Here began the Weird Years, the Ironic Years, the Tacky Even for Them Years, the Flirting Awkwardly With Dance Music Years, the Dark Years, and/or the Sucky Years if you look to these guys for meat-and-potatoes guitar-god bombast. Zooropa was originally intended as a stopgap EP in between legs of the Zoo TV tour, but like many things in U2’s universe, it just kept growing. It is not quite their most despised album — that’d be 1997’s stupendously gaudy Pop — but it is undoubtedly their weirdest. (The wordless, formless first 1:45 is basically an Oneohtrix Point Never record: uneasy synths, plaintive piano, thrice-VHS-dubbed chattering ghouls.) That a lot of it sounds totally normal now shows how oddly ahead of, and out of, its time it was. As we will see, one of 2012’s best rock songs rips off Zooropa’s first single wholesale. But that only somehow makes it weirder.

We should just dispense with “Lemon,” right? Okay. People hate “Lemon.” Maybe you do, too. Maybe you are howling “SHE WO-AH LEMMMON” in a derisive-farting-sound falsetto at this precise moment. Maybe Bono’s Lawnmower Man shtick in the video still gives you hives. Or perhaps you recall the band’s semi-disastrous PopMart Tour, the nadir of this nadir era, a “spoofing crass commercialism by wantonly embodying it” fiasco wherein the band’s stage props included a 40-foot mirror-ball lemon they could ride around in — except occasionally it got stuck, trapping them inside, which is basically the real-life equivalent of this and is almost too obvious a metaphor to be real. If you remember one thing about Zooropa, this song would be it, and if it’s really the only thing you remember, then it is most likely an unpleasant memory.

“Lemon” does make a bit more sense, though, now that every Serious Rock Band is forced to either co-opt dance music or be eclipsed by it. It is vapid in a very brave way, whereas “Numb” is droll in a very brave way, and has aged far better: That’d be the aforementioned rock-radio-trolling near-tone-poem first single, “sung” by the Edge in a narcotized monotone, with a way more tolerable video that nicely satirizes all the bullshit the Edge has had to spend decades of his life putting up with, sharing a tour bus (and/or a lemon) with a doubtless insufferable guy Time would one day suggest could save the world. (And, yes, it has a bass-drone pulse neatly echoed by Muse’s recent, uncharacteristically restrained “Madness.”)

Zooropa has one legit, fairly conventional all-time U2 classic: “Stay (Faraway, So Close!”) a pathos-radiating slow-burn ballad in the time-honored “One”/”With or Without You” vein — depending on your blood-alcohol level, you might even convince yourself it belongs in that tier. The album’s second half drags, but eh, so did the The Joshua Tree’s, relatively. Professional Bono haters should proceed directly to faux-baggy smarmadelica throwaway “Some Days Are Better Than Others,” which is like some sort of doofy-lyric ammo dump: “Some days are sleepy / Some days are sloppy / Some days you can’t stand the sight of a puppy.” (Guess which kind of day that one was?) And ah, right: The whole shebang ends with Johnny Cash singing an electro-schmaltz ballad called “The Wanderer,” which is monumentally incongruous and gets a little sassy about the separation of church and state — but hey, it beats Pop’s “Discothèque.”

Yes, 20 years on, Zooropa is a weird blip best understood as a portent of the burps that followed, a mega-band dipping a big toe into murky art-rock waters before belly-flopping completely with Pop and its subsequent crass, costly, cred-depleting tour misadventures. (The “costly” part, at least, is a weakness that plagues the band still, even though 360 was the biggest-grossing tour of all time; please read this photo caption.) The Time-conquering comeback would soon follow. But it’s hard not to mourn this era, now that they’ve settled into a middling “ho-hum album just to justify another lavish tour” phase that may never actually end, neither offending nor particularly exhilarating anyone. Mark this record, then, as a celebration of a time when U2 was still musically daring; give “Lemon” credit at least for successfully trolling you. It is the maddening, befuddling, discomfiting, somewhat ill-advised, occasionally inspired sound of very famous, very difficult men trying on some ill-fitting clothes.