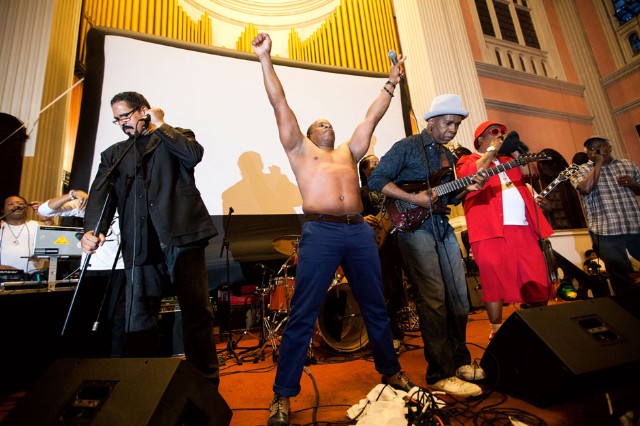 On the same day that Jay-Z invaded a Chelsea art gallery to promote a five-million-dollar Samsung tie-in, two members of the Sugarhill Gang turned up at a Harlem church to remind us about the very first time you could buy any part of hip-hop culture in a store. Some 34 years after performing on the first commercially released rap song ever, “Rapper’s Delight,” the Sugarhill Gang held a quick, star-studded throwdown in Mount Morris Presbyterian. Original members Wonder Mike and Master Gee, alongside energetic ringer HenDogg, opened with “8th Wonder, which promises the “real cold crush” — which soon came as actual Cold Crush Brother Grandmaster Caz promptly appeared to run through some Melle Mel songs that the band had rehearsed (Mel was promised but was a no-show). Caz was to ultimately take his spot in “Rapper’s Delight” to reclaim the lyrics that Big Bank Hank “borrowed” for the iconic single. “This man wrote every single lyric for an individual who will remain nameless right now,” said Master Gee after clarifying, “He’s getting his full credit. He’s getting down with Wonder Mike and Master Gee.”

Unfortunately, that credit hasn’t been exactly been coming with a lot of monetary reward. The evening was part of a screening of the shaky, low-budget, nonetheless fascinating documentary I Want My Name Back in which Mike and Gee claim they’ve seen about $250k each from one of the most successful 12-inch singles in recorded history — ultimately a 90-minute smear piece on the Robinson family who signed them in 1979 and retroactively copyrighted everything from “Sugarhill Gang” to “Wonder Mike” in the decades following.

Still no court can stop the power of “Rapper’s Delight” itself. Last night’s 14-minute version was performed in tandem with Caz, Sugar Hill house-band drummer Keith LeBlanc on a precise, studio-ready, propulsive groove; house-band bassist Doug Wimbish stalking the stage, and the Roots’ Captain Kirk Douglas strumming along. All four members of Living Colour joined in, punctuating the song with howling melodic counterpoints (Corey Glover), ripping guitar solos (Vernon Reid), and —once Will Calhoun nabbed the sticks from LeBlanc — an intense volume that warmly ricocheted throughout the the church. By song’s end, the band had segued into a stomping version of Sly and the Family Stone’s “Thank You (Falettinme Be Mice Elf Agin)” with a Kirk solo bridging hip-hop’s pre-history, past, and present. What we heard was clearly not a test.