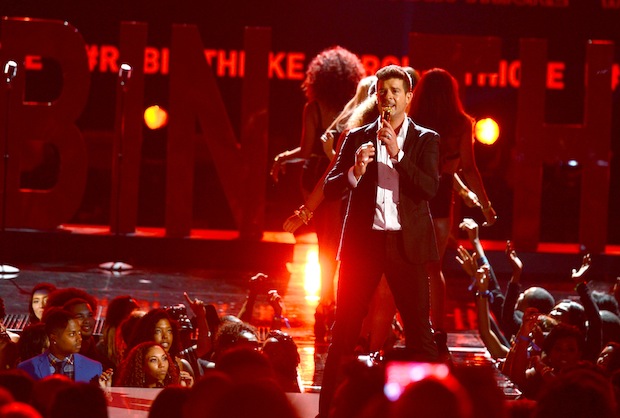 Robin Thicke and Kendrick Lamar both had a helluva BET Awards. The semi-controversial blue-eyed wonder performed his No. 1 single “Blurred Lines” of course, while Lamar spent as much time onstage as host Chris Tucker, playing his “Bitch, Don’t Kill My Vibe” and appearing alongside Miguel and 2 Chainz for their own hits. Still the two didn’t come together for Thicke’s new single “Give It 2 U,” a wobbly track that features a nasty little rap from the Compton prince. The song is the same one that Thicke premiered on the radio in May, with one alteration: 2 Chainz’s verse has been snipped.

Produced by Dr. Luke and co-written with Will.i.am, “Give It 2 U” is an obvious attempt to capitalize on the unexpected success of “Blurred Lines” with an extra radio-ready single. Still, despite the shamelessness, it’s a sleek song with a strong vocal turn from Thicke that helps further his art (and manages to sneak in yet another boast about his package). Listen for the funk licks in the outro, which nod to core of Thicke’s upcoming album Blurred Lines, which drops July 30.