Rap Songs of the Week: Jay-Z Resigns Himself to the Reality of Miley Cyrus Twerking 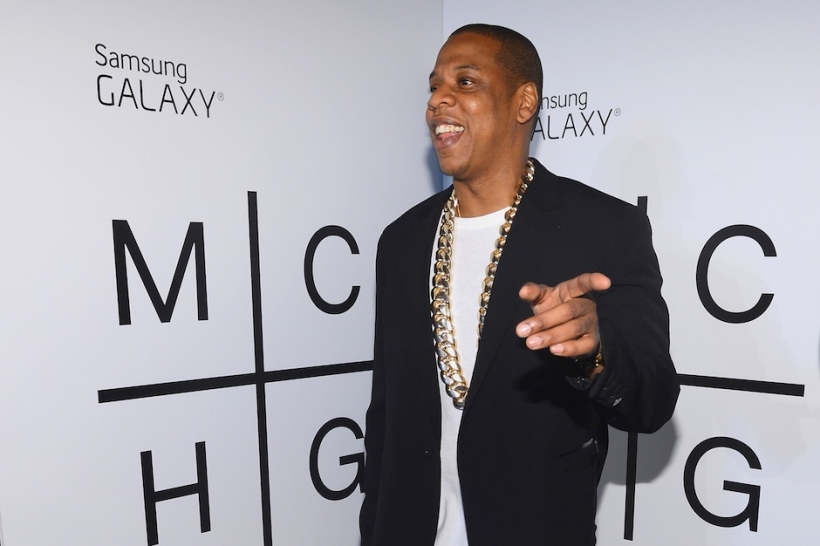 Jay-Z “Somewhereinamerica”
This track has the hoppity-hop-honk horns of Macklemore’s “Thrift Shop” and the polite piano-plink-plonk of Kanye West’s Adam Levine of Maroon 5 collaboration “Heard ‘Em Say,” and Jay-Z isn’t so much rapping here as he is talking pretty fast. Yet, it’s still one of the most inspired tracks on Magna Carta Holy Grail. Mostly because it ends with Jay declaring, “Somewhere in America, Miley Cyrus is twerking,” on some absurdist alt-lit poetry-type shit. Some are reading it as a “diss” to Miley, but it seems more like Jay-Z, after a laundry list of his successes (implicitly symbolic of the possibilities any disenfranchised American could attain), shrugging because, nevertheless, the child of a mullet-rockin’ country goofball from the ’90s is a cos-playing rap-video stripper on YouTube. It has the same definitely-not-happy but not-exactly-sad tenor of, say, the final lines of Phillip Larkin’s “Aubade”: “Postmen like doctors go from house to house.” It’s a low-stakes #justfacts vision of how unfortunate it feels to be an American in 2013. Tao Lin, watch out for the Jigga Man!

Kanye West “Bound 2 (Matic808 Remix)”
Baltimore club producer Matic808 has remixed the entirety of Kanye West’s Yeezus, turning the supposedly minimal, #feelingz-purge, pretty-hate-fuck into Yeezus: The Baltimore Club Edition, a non-stop, damn near industrial ghettotech dance stomp that actually delivers on the promise of Ye’s punk-noise pre-release build-up. On “Bound 2,” Matic throws in a few pieces of 808s & Heartbreak’s “Love Lockdown” connecting the wounded sad-sack dots between the two records, giving you a supercut of Yeezy’s best shit-eating-grin zingers (“What you doing in the club on a Thursday?”), and then, appropriately, ending the song with an in-the-red buzzing adjustment to Charlie Wilson’s truly transcendent bridge. Wow, just wow to this one.

Starlito “The Ides of March”
The cover to Starlito’s Cold Turkey mixtape features the Nashville rapper’s name backwards, a pile of ice cubes, and an uncooked turkey. It’s so literal it stops making any sense, which is a good way to start unpacking Starlito’s screwy, gritty rapping: “All these stacks I made, my taxes paid / Still slap you in the face like aftershave / Think because we ’bout it we won’t mask up? / It’s a masquerade / All these bands in the month of March, I thought I was at a parade.” Starlito hovered around Cash Money during Lil Wayne’s incredible mixtape run and “Ides Of March” is one of those tracks that makes it easy to speculate that maybe, just maybe, he was responsible for ghostwriting some of those classic Weezy mixtape bars.

Ty Dolla $ign, feat. Nate Howard and Kevin Gates “Intro”
Pairing a post-Weeknd loverman dirtbag ‘tude with an above-it-all-but-down-in-it, Dream-like tone, Ty Dolla $ign might have made the R&B album of the year with Beach House 2. A ponderous spoken-word intro to the intro from someone named Nate Howard, backed by somber strings and waves crashing suggests something far more ambitious than the paranoid pimp-talk pleasantries (“You found that rubber in the trash can / I said when the fuck you become the trashman?”) that follow, but that’s part of the awkward thrill. The Weeknd and the-Dream are the reason we’re paying attention to this guy, but Ty$ also has a voice that dips back before the synth-buzzing R&B of right now: Tevin Campbell, Guy, Deele, and lots of other off-to-the-side crooners that time has sort of forgotten. Inexplicably but somehow effectively, Kevin Gates’ rumble-raps are coated in a sea of crackling electro static, just because.

Zilla “Erry Witcha Way”
Less than a year old, the influence of Kendrick Lamar’s good kid, m.A.A.d city is already tangible. Not only on young whipper-snapper A-student MCs like Chance the Rapper, but world-weary hard-spitters (Sean Falyon’s “All the Paper” is a riff on “m.A.A.d city”), and here, a Huntsville space-trapper. Zilla, with the help of the still reliable Block Beattaz, riff on Kendrick Lamar’s deliberate, “ya bisch”-peppered cadence of good kid, m.A.A.d city’s “Money Trees.” But Zilla doesn’t give listeners the catchy hook that Kendrick provides (“Halle Berry or hallelujah”), so it’s just an increasingly dark dive into the desperate cash-grab hustle, interrupted by a hook that jumps between helium-voiced boasting and screwed-down tough talk, never offering anything resembling redemption.