Almost two decades after Kurt Cobain’s death, Nirvana’s story is evidently still news to some. Sub Pop tweeted on July 23, “We received a letter in our mailbag asking Nirvana to send a video to support a campaign bid for homecoming queen.” The label posted an image of what it says is the letter, in which a Virginia Tech college mascot asks Nirvana to send a video that could be included in a Homecoming Week video collage.

Complete with a gender pronoun mix-up and laughably un-Nirvana-like musical references, the letter would seem too rich to be true. “It presents great publicity for them, and as Virginia Tech loves Nirvana, we’d love to have her in our video,” the anonymous student writes. “They would be one among artists including Big N Rich, Ying Yang Twins, the Cataracs, Slightly Stoopid, and three famous NFL Players.”

What would Nirvana have to do to participate in this higher-education opportunity? Simply send a video (iPhone footage recommended) saying, per the letter, “What’s up Virginia Tech? This is Nirvana! Just wanted to wish you guys a Happy Homecoming Week and good luck at the game this Saturday. LETS GO HOKIES!”

It’s not clear yet whether this is a bizarre scam or some poor kid is really being put on blast. Sub Pop tweeted, “This person could just be pulling an elaborate ruse on us — the joke tables could very well turn.” The label further confirmed that the missive, if real, was definitely a form letter, filled in without regard to whether the bands in question actually existed.

So it’s unlikely there’s some unfortunate college mascot in Blacksburg, Virginia, reading about herself today on the Internet. But it’s possible. Sub Pop, which signed Nirvana before the band’s jump to the majors, said on Tumblr that it “dressed up and obliged,” so perhaps there’s a video response on the way. “‘LET’S GO HOAGIES!’ Or something like that.”

No official response yet from Dave Grohl, Krist Novoselic, or Pat Smear, either, but considering the surviving Nirvana members have recently been playing with Paul McCartney — including earlier this month in Sub Pop’s hometown of Seattle — maybe they can all reach out to this homecoming candidate. A warm-hearted Grohl iPhone video could be just the thing. Unless there’s someone else he supports for Virginia Tech’s homecoming queen? 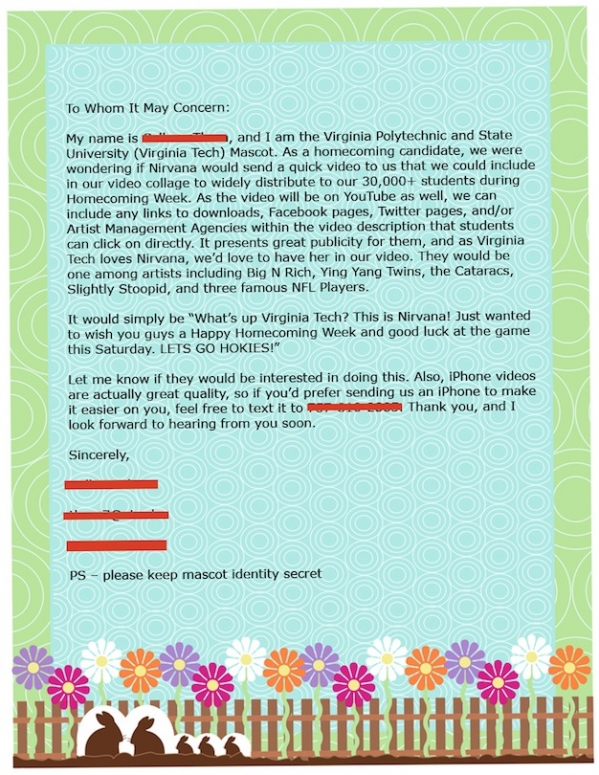