On July 23, Sub Pop said it received an email from a Virginia Tech college mascot asking for a personal video from Nirvana in support of her homecoming-queen candidacy. The email writer referred to Nirvana as a “her” and offered the enticement of appearing alongside Slightly Stoopid and three “famous” NFL players. She even whipped up a sample message for Nirvana to read in the video. The only problem: This innocent young soul showed no sign of knowing Kurt Cobain died more than 19 years ago.

The whole incident has the feel of a prank or a stunt, but all credit to the good people at Sub Pop for keeping it amusing. Derek Erdman, who’s described on the 25-year-old Seattle label’s website as “our friend and front desk receptionist,” posted a video on the night of July 24 delivering the requested personal message. Mudhoney’s Mark Arm appears, and along with the rest of “Nirvana,” he reads the homecoming candidate-cum-mascot’s script, except swapping out “Go Hokies” for “Go Hoagies.” Mmm, sacrilicious.

In a post for Seattle’s the Stranger, Erdman also includes what he says is an iPhone text conversation with the Virginia Tech student. He asked her to send a link to the full homecoming video once it’s ready. The response: “Of course vt loves you guys! And will do!”

The most priceless part of all of this is perhaps occasional music writer Jason Josephes’ playfully conspiracy-minded comment on the post: “A hoagie is also called a hero. Dave Grohl wrote a song called ‘My Hero.’ Coincidence?” Where is that Grohl fella in all this, anyway? 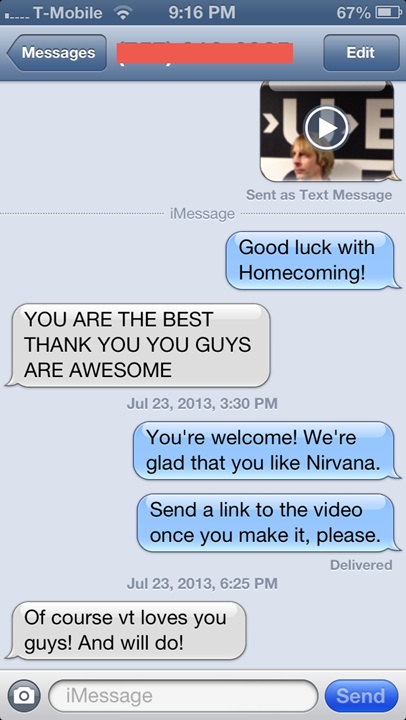