Metallica Wreak Havoc in Disaster-Filled ‘Through the Never’ Trailer

Metallica have unleashed another preview for their upcoming 3D concert film, the IMAX-sized Metallica Through the Never. Like the previous trailer, this new clip blends footage of the heavy metal giants’ live show with disaster-flick effects. A shot of frontman James Hetfield belting out “Enter Sandman” cuts to an apocalyptic scene filled with flaming cars, riots in the streets, and actor Dane DeHaan fighting for his life. Written and directed by Nimród Antal, Metallica Through the Never is a half-concert movie, half-narrative film that stars DeHaan (The Place Beyond the Pines, The Amazing Spider-Man 2) as a roadie who is “sent out on an urgent mission” while Metallica play a sold-out arena gig. The forthcoming feature will open on every single IMAX screen in North America on September 27 and will then roll out to standard theaters on October 4.

As for Metallica’s musical prospects, drummer Lars Ulrich says that the band will “probably” start recording their next album in 2014, and follow the LP with a tour. “We’ve had a couple of jams at HQ,” he told Faster Louder. “[Next year] we’ll be all about a new Metallica record. In about another year and a half you’ll probably see one.”

In the meantime, watch the new trailer for Metallica Through the Never above, and scroll down for the movie’s official poster. 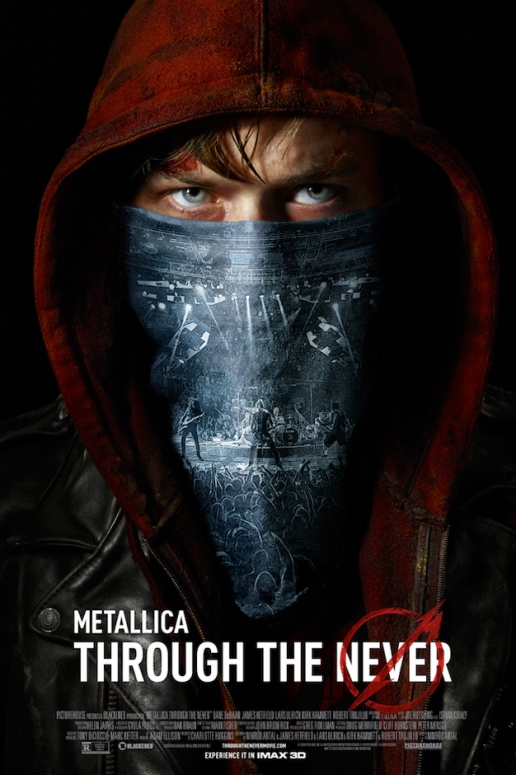