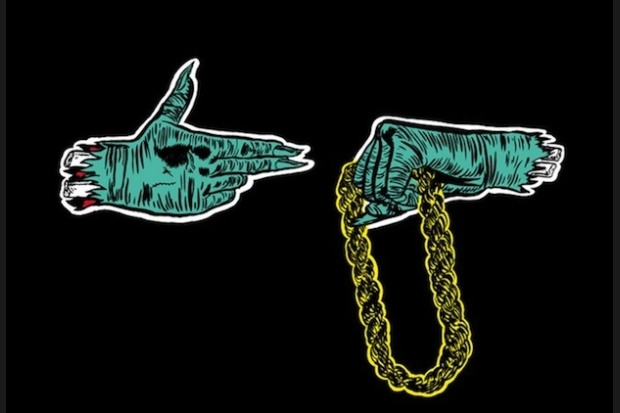 Run the Jewels, the new one from Killer Mike and El-P, may lack the ambition of Mike’s R.A.P. Music (which flat-out gunned  for No. 1-noise-rap-classic It Takes a Nation of Millions to Hold Us Back), but that’s probably a good thing. Mike’s realer-than-real-talk rapping and El-P’s “What would a P.K. Dick novel sound like?”-like production remain, but the goal is something less cohesive and more raw-nerve fun: Two guys trading verses, trying to think of mean-mugging couplets and terse declarations about how fucked-up everything is, over inward-gazing Carpenter-drenched electronica. Songs are whirls of words that crash into simple-sentence hooks that recall Fugazi lyrics; abstract and obvious at the same time, and the kind of thing you can imagine someone tattooing on their forearm: “Run the Jewels”; “And I walk around like I got a 36-inch chain”; “I get so high, I close my eyes, like I may die and I won’t come down.”

In particular, El-P is often just blacking out here, inspired by his rumble-voiced partner, it seems, and maybe a little charged up by his friend Danny Brown’s A.D.D.-style enjambments: “With the pull of a pin grenade, get a crowd to their feet and a soul to its options / I’m a fool for the win, I’ve been made to be loud while these other cats drowning in softness / In an urn or the dirty get tossed in / With a grin or a smirk.” Over the past decade, El-P has dived further into scraping, soundscape-making and his raps have teased spoken word or just plain talking, but here, you’re hearing the pissed-off guy from Funcrusher and Fantastic Damage again. It’s exhilarating. Everything is intended to be the aural equivalent of punching you in the face or smacking you upside the head. There’s no need for nuance or delicacy.

Yet, Run the Jewels never feels overwhelming in the wrong ways. It’s “masculine” in a way that rap fails to understand these days: Burly and creatively expressive rather than meathead oppressive. It’s the aesthetic of, say, Black Flag, who did full-stop dude-bro macho music for sure, but found room for subtlety and humor too. It’s artistic-leaning fight rap and, as a result, it’s not towing a party line (even the rock-critic-friendly capital-A album steez that R.A.P. Music embraced). Or, look at it this way: The guests on Run the Jewels are stalwart Atlanta legend Big Boi, Until the Ribbon Breaks (the digital glitch-game David Sylvian), and Prince Paul making loverman jokes about taking a lucky lady out to Long John Silver’s. That mess of personalities just would not have worked on R.A.P. Music. Here, it works perfectly. There’s something down-to-the-bone discordant about Run the Jewels that keeps you on your toes the entire time.