Two weeks after a leaked version made its way online, Kanye West finally released the finished product of his “Black Skinhead” video — stylized “BLKKK SKKKN HEAD” — at midnight. Like the early rendition, the official video features a CGI Kanye rapping the song, with imagery of wolves, gorillas, and men in pointy black hoods throughout, plus a staggering naked Kanye, showing off his lengthy goods. The only noticeable difference between the leaked video and this one is that now fans can control its speed and take screenshots, all while using a cursor shaped like a black hand giving the finger.

Directed by Nick Knight, who also helmed Kanye’s “New Slaves” video projections, the clip comes with a press release by Yeezy’s creative house Donda, which you can read below. Previously, West had posted a series of tweets about the leak, expressing his disappointment and asking that people wait for the official version:

The BLKKK SKKKN HD video that leaked yesterday was not the official version. Me and Nick Knight have been working on this video for 5 months and for creatives it’s heartbreaking when something like this happens. The final version will be ready within the next week. So any website that may have the unapproved / unfinished ruff. I ask you to please take it down. Allow me and Nick to give the world what we’ve been losing sleep over. And to who ever leaked the video… FUK YOU!

Of course, leaks aren’t the only thing the Yeezus mastermind has to worry about these days. On Friday, he was involved in an incident with a papparazo at LAX, which may lead to charges being pressed against the rapper. West allegedly grabbed the photographer’s camera and, according to a witness, threw several punches. The LAPD issued a statement on the kerfuffle to US Weekly over the weekend:

“Today [July 19] at approximately 2:00 p.m., at the Tom Bradley International Terminal (on the arrival level curbside), Los Angeles Airport Police officers were flagged down by a citizen (photographer) who alleged that he was taking pictures of an individual when he was battered by the subject. The alleged subject was not at the location nor was he observed by officers at the scene. LAFD was notified, responded to the location and transported the victim to a local hospital for medical attention.  A police report was taken by the Los Angeles Police Department and the investigation is ongoing.”

The cops apparently referred the case to the DA as a felony robbery case, not battery, because of West’s attempt to take TMZ goon’s camera. That was his second confrontation with photographers in as many weeks, with the first resulting in his epic “Don’t talk to me” rant. Kanye has yet to comment on the situation, but he did take to Twitter to open up this bit of dialog:

I open the debate… The 2nd verse of New Slaves is the best rap verse of all time….meaning … OF ALL TIME IN THE HISTORY OF RAP MUSIC, PERIOD

Never a dull moment with this guy. Check out Kanye’s press release for “Black Skinhead” below. 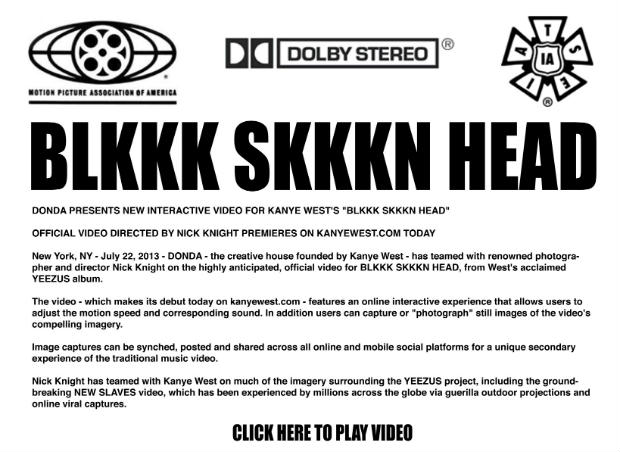