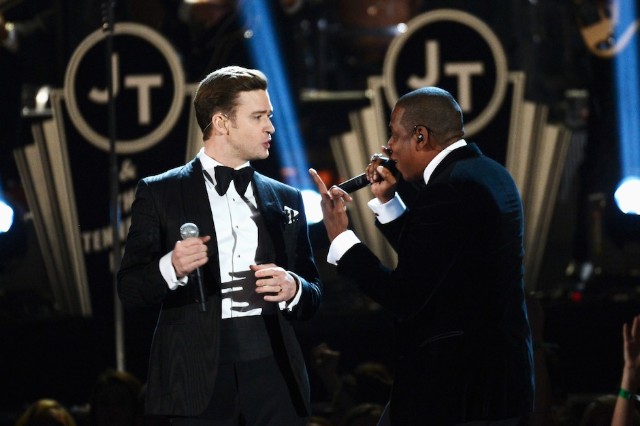 Jay-Z and Justin Timberlake’s reign over London’s three-day Wireless festival included the first-ever live performances of new tracks, but it also carried with it a sadder note. According to the BBC, two men were hospitalized after being stabbed at the festival, and Scotland Yard said one of the men was in critical condition. Both men were thought to be in their mid-20s, and the other was said to be in stable condition. Police didn’t announce any arrests.

The Magna Carta Holy Grail rapper and The 20/20 Experience singer each performed solo sets on the festival’s opening nights before joining forces last night in a preview of their upcoming Legends of the Summer tour. They joined each other during their respective gigs; look below for fan video of their debut live performance of MCHG’s “Holy Grail,” which features Timberlake, as well as Timberlake’s debut live performance of new single “Take Back the Night.” On Sunday night, Rihanna joined the co-headliners for “Run This Town,” and you can watch a (fuzzy) clip of that below as well.

In other Jay-Z-related news, the NME reports that in a four-part BBC Radio 1 interview to air this week, he says Kanye West wanted MCHG’s “Holy Grail” and “Oceans” for their collaborative album Watch the Throne. Jay-Z is quoted as saying the two rappers spent “four days, four days literally arguing … not like fighting. Well, there was some pushing at one point but not between us, just everyone else got a little excited.” Four days literally arguing sounds like a long time. Haven’t heard the whole interview yet, but here’s betting Vice President Joe Biden was called to intervene.