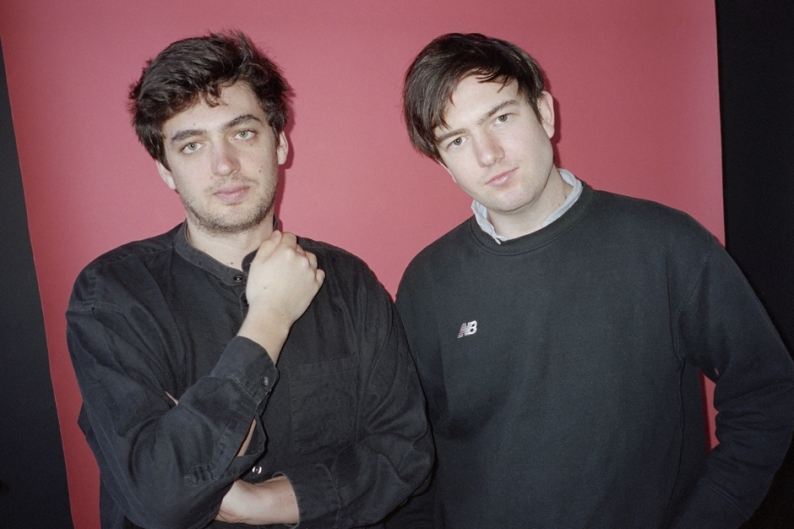 Blondes Swisher (RVNG)
Blondes’ Sam Haar and Zach Steinman started out making chiming, chugging, not-quite-dance music poised somewhere between Krautrock and nu-disco, Smallville and Delorean. But at some point between their self-titled debut album, from 2011, and Swisher, something seems to have happened, and it changed them — perhaps involving falling down a well, spending 48 hours at Berghain, or both at the same time. Swisher, released last week with virtually no advance notice, is darker than anything they’ve done before. The rhythms are more linear; much of the Balearic mist has burned off, revealing a cold, hard, metallic underlay. (Swisher is the perfect title for it; an onomatopoeic goldmine, the record thrums with fizzy whisper and filtered squelch.) It’s not all so stern; the colorful chords of “Andrew” transmit balmy, tropical vibes, the skipping closer “Elise” bubbles with optimism, and even at their most severe, their chopping-block beats are generously textured and cushioned with air. Sumptuous, hypnotic, and impeccably controlled—both at the micro level of individual sounds, and the whole sweep of the album itself — it’s a huge step up for the duo, and one that significantly raises the bar for the indie/dance/noise sector as a whole.

Beautiful Swimmers Son (Future Times)
Lest there were any doubt about it, this is Maxmillion Dunbar’s year. In April, he dropped House of Woo, a mesmerizing album that projected lo-fi house through a succession of lenses you’d think would be incompatible — boom bap, new age, Peter Gabriel’s “Sledgehammer,” squirrelly electronic improv. He followed up with a set of restless drum tracks for L.I.E.S., under his Dolo Percussion alias. Now he’s back with his partner Ari Goldman in the duo Beautiful Swimmers, and their debut album, Son, once again raises the bar for this whole DIY-house thing. Born out of the duo’s extended hardware jam sessions, much the same way House of Woo was created, it’s nonetheless breezier and groovier; with the exception of the beatless, liquid “Gettysburg” and a pair of baby-making slow jams (the sample-heavy disco-funk burner “Joyride” and the overdriven R&B miniature “Easy on the Eyes”), it’s focused squarely on the dance floor, with beefy Linn snares, jangly funk guitars, carnival whistles, and sampled chants striking just the right balance between intuitive and unhinged. Skipping over the usual retro touchstones (Larry Heard, Kerri Chandler, Derrick May), they dig deep into funk and disco inspirations that sound fresher and more fertile; every track sounds like a flea-market goldmine, proving that their dollar-bin finds are better than your dollar-bin finds every time. The year’s top-10 lists just got a little more crowded. (Stream the whole album at NPR.)

µ-ziq Chewed Corners (Planet Mu)
Scenes thrive upon boundaries — dividing lines that allow them to define their respective projects against whatever it is that lies outside. But they also thrive upon cross-pollination and contagion, from germs borne across borders that strengthen the cultures on either side. For 20 years, Mike Paradinas has been facilitating that kind of mutation, smuggling ideas from rave and club culture into the hermetic, over-intellectualized world of “electronica” and fortifying punishing breakbeat tracks with IRCAM-grade frequency squalls. It’s been seven years since Paradinas released an album of his own; he’s focused instead on his Planet Mu label, which has evolved from its origins in IDM and breakcore into one of electronic music’s most versatile and risk-taking labels, a platform for forward-thinking grime, dubstep, house, ambient, and electo pop; most recently, Planet Mu more or less single-handedly introduced non-Chicagoans to footwork.

Somewhat surprisingly, Chewed Corners doesn’t have a whole lot in common with Planet Mu’s recent direction(s); while a few tracks feature the rickety hi-hat patterns of footwork, there are no outright footwork pastiches. The track that comes closest, the appropriately titled “Tickly Flanks,” takes that genre’s rhythmic tropes and submerges them in the viscous synthesizers that are his stock in trade. Throughout, it’s the synths that take center stage, buzzing and gleaming, diamond hard and flaky as mica. There’s a genre study or two along the way — “Houzz 10″ absolutely nails the whole Balearic house thing without sounding even a smidgen retro, while the detuned “Monyth” pretty much beats Boards of Canada at their own game – but mostly it’s sui generis, just Paradinas at play in the fields of the waveforms, uniting Emeralds and acid house, hip-hop and new age into an unlikely and unstable whole, all the more dazzling for the way it feels ready to pull apart at any second.

Donato Dozzy 200 EP (Electronique.it)
Rome’s Donato Dozzy is already known for his masterfully focused techno productions and his morphing ambient DJ sets; now, he seems to be folding those two things together. Spectrum Spools has just announced Donato Dozzy Plays Bee Mask, an August release that finds him reworking the Philadelphia musician’s catalog more in the manner of a DJ (or dub mystic) than a conventional remixer, an approach he also takes on the 200 EP. All three tracks are taken from a recent podcast that he described as “an intense, intimate and evocative portrait of the reality that is Rome.” It’s an unusual proposition, to chop a DJ mix into discrete pieces and release them as standalone tracks, but the record is so densely layered and cross-hatched, full of Ouroboros pulses and the suggestion of distant voices, that there’s no question as to who is making the music. The source material, listed in the press release, focuses exclusively on records from Rome, from electronic-music pioneers (Marcello Giombini) and rave icons (Leo Anibaldi) to Dozzy’s own contemporaries (Giorgio Gigli, Dino Sabatini). In the introduction to the podcast, he writes, “I have never managed very well in Rome— a lot of friends have been found and then lost over the years… It is a diabolical machine shaped by tension and release.” You can hear that in the music: Roman techno has always been both suppler and steelier than almost any other, and Dozzy pushes those qualities to new extremes here, particularly on the 10-minute “200.3,” in which competing rhythms wrestle for control of the downbeat, chafing as they phase.