The Next British TV Show You Can’t Miss

'Black Mirror' explores technology's dark side. You may have to, as well, if you want to see it 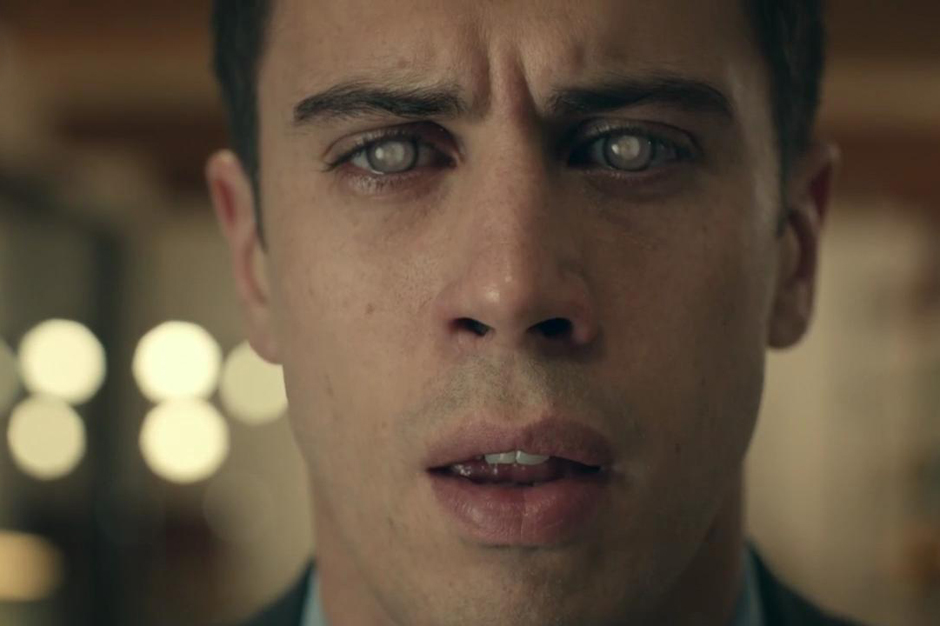 “White Bear,” the most unsettling episode of the British TV series Black Mirror, opens with a distraught woman running through an unnamed town in the English countryside. She cries and begs for help while neighbors file silently out of their houses, unfazed. They hold up their phones — those shiny, reflective surfaces referred to in the series’ title — and simply record her anguish. It’s disturbing because it’s not disturbing enough: The spectacle of a crowd seduced by a screen is hardly shocking. In The Walking Dead the zombies walk, in World War Z they run, but in “White Bear” they just blankly film you with a handheld device.

Each episode of Black Mirror imagines the bleak consequences of modern technology, which is such a compelling and relevant idea for a television show that it’s sort of baffling to realize the absence of something similar in our current lineup. (Person of Interest doesn’t count.) But here’s the frustrating part: You can’t even watch Black Mirror yet, at least not legally. Creator Charlie Brooker and the show’s network, Channel 4, haven’t figured out the best way to export the six, unrelated, one-hour episodes, in part because there are only six of them. In the U.K., Black Mirror’s popularity is closer to critically acclaimed but less-watched shows like Mad Men, commanding only about one-fifth the viewership of a hit like Downton Abbey. According to Brooker, he’s considered Netflix an option, and he’s also contemplated the idea of creating longer-form adaptations of the episodes for an interested network, but no one’s been able to provide specifics. A representative from the network asked us to hold off on this piece, implying a deal was near, but then said they “weren’t ready” to share any news. In the meantime, Brooker’s not bothered by enterprising individuals who find other ways to watch it. “I torrented Breaking Bad, because we were behind here and I wouldn’t wait, and why would you?” he says.

Brooker, a former TV columnist and creator of the zombie series Dead Set, which was picked up by IFC in America, says he got the idea for Black Mirror after Dead Set concluded back in 2008. “I missed shows like The Twilight Zone,” he says. “I read a biography of Rod Serling, and it said Serling wanted to write about racism and McCarthyism, but felt that he was being censored by sponsors who didn’t want him to tackle edgy subjects. He realized that if he wrote about these things in the guise of a metaphor, then he could tackle the subjects he wanted. That struck a chord with me, and I thought, What am I worried about? And generally, the thing that has made me increasingly uneasy is technology.”

In one of the strongest episodes, “The Entire History of You,” an implant allows characters to record every moment of their lives, which they can replay privately or for friends (and airport security) using their eyes and a thumb-sized remote, clicking through memories as easily as we swipe images on a smartphone (which sounds a lot like Google Glass 6.0). Here, a married man becomes obsessed with the idea that his wife has had an affair with an old friend, and plays back scenes of the two of them together over and over again. It’s almost a shame the plot is singular to this episode, because the potential is thought-provoking: Would such an advancement effectively eradicate crime and deception? Would the nostalgia be debilitating?

“Actually, I think it would kill nostalgia,” says Brooker. “You would see how your memories were — unembellished and unfiltered. But I think it would be very easy to revisit painful things and see where you fucked up and constantly end up staring backwards.” (Robert Downey Jr. beat George Clooney to an option of the episode and plans to turn it into a sci-fi thriller, though Brooker is not involved.)

Another installment, “Be Right Back,” crosses You’ve Got Mail with Pet Sematary: A woman grieving for her departed partner is introduced to a service that allows people to electronically communicate with a version of the deceased based on their previous online presence. Rather morbid, but there’s already a Twitter application underway called LivesOn that promises essentially the same thing (the motto: “When your heart stops beating, you’ll keep on Tweeting.”). “I think I read an interview with one of the people behind it,” says Brooker. “They said they had been thinking about it, and after they saw the episode, they thought, ‘Okay, there’s an appetite for this.'” (Pray nobody feels the same way about “White Bear.”)

Most of the episodes resonate similarly, whether they’re inspired by real-life events or cleverly anticipate them. Facebook’s Timeline feature launched the day after “The Entire History of You” first aired in December of 2011, and Brooker recalls being offended by the language the site used to ask if he wanted to “hide” certain information, like the wife in the episode who tries to wipe her memory bank of indiscretion. “Don’t tell me I’m fucking hiding things,” he says. “Like I’m being a control freak!”

In the series debut, “The National Anthem,” England’s Prime Minister has to decide whether or not he will acquiesce to the demands of a kidnapper by performing a lewd act on live television to save the life of a Royal Family member. Brooker got the idea from an incident in 2010 when former Prime Minister Gordon Brown was forced to apologize to a heckler from his own party after he called her a bigot when he thought his mic wasn’t on, primarily to satisfy the media that relentlessly reported the story. “I thought, ‘Who’s in charge here?'” says Brooker. “It’s certainly not the Prime Minister.” So he took the chaos and turned it into a parody of 24.

“The episodes are usually written in an absolute fucking panic, because I’m a pretty bad procrastinator, and parody gets me through the writer’s block,” says Brooker, who writes with a team, including his wife, and doesn’t consult outside tech experts. “Perhaps I shouldn’t have shared that.”

“15 Million Merits” focuses on prisoners who are quite literally enslaved by entertainment; and the most recent episode, “The Waldo Moment” — about a vulgar CGI bear who runs for election when a meme turns serious — aired in February, just as comedian Beppe Grillo won a quarter of the vote in Italy.

Despite Black Mirror’s pervasive sense of unease, if not downright nightmarish scenarios, Brooker thinks it’s more darkly funny than dramatic. “I am always quite surprised that people find [the episodes] devastatingly upsetting,” says Brooker, who hopes for a third season (no word yet). “I don’t think I’m a pessimist. I’m a neurotic, and the series reflects it. Most television shows reassure you by patting on your head and saying, ‘Here’s those characters you like, and they’re in a scrape, but it’s all right.’ This is different. It’s just me being really worried.”

But for all his concern, Brooker insists he is not anti-technology. “I am a gadget addict,” he says. “I don’t think that the machines are going to destroy us. Before I quit smoking, I used to wake up and reach for a cigarette immediately, and now I do that with an iPhone. I don’t know if that’s sinister, but it’s certainly odd.”