15 Albums You Can Hear Now: Explosions in the Sky, Rudimental, Pond, Medicine, and More 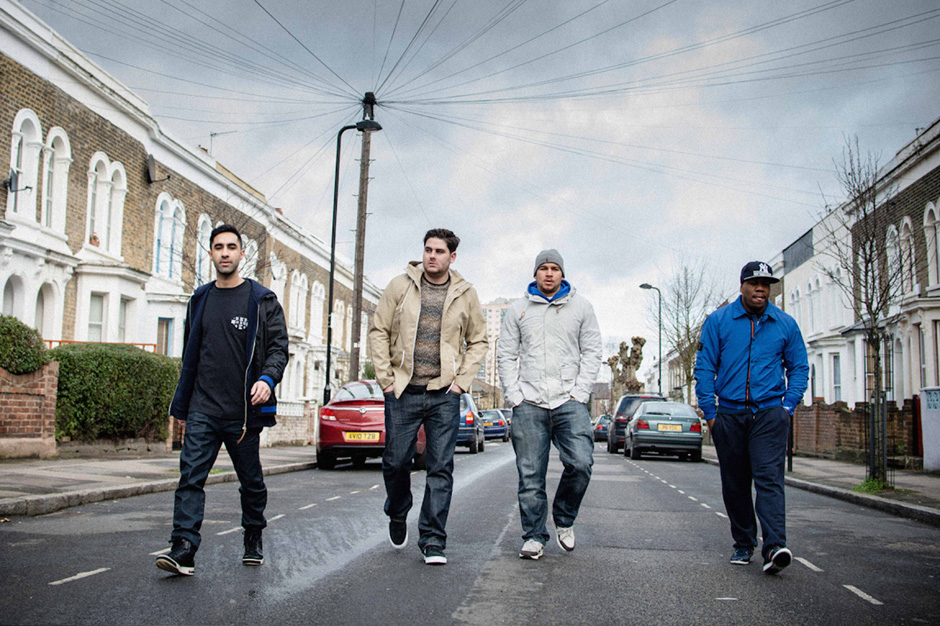 1) Rudimental, Home. “While Rudimental hat-tipped dancehall soundclash culture with an early release of ‘Deep in the Valley’ featuring MC Shanti back in 2011, Home presents more explicit references to the group’s roots. The album’s first release, ‘Feel the Love,’ featuring John Newman on vocals, whips a frantic jungle beat under soaring organs and an uplifting trumpet solo. Deep-house vocals also run all over the album, and ‘Spoons’ and ‘Baby’ use smooth, soaring hooks to create garage-influenced bangers.” (via SPIN, with track-by-track commentary)

3) Pond, Hobo Rocket. “Pond started in 2008 — less like a band and more like a loose amalgamation of musicians looking to make a lot of noise. At its core lie the meandering psychedelic adventures of artists like Can, whose own roots can be traced directly to the Velvet Underground’s minimalism and drone. But, at the same time, Pond wouldn’t attract the mainstream attention it has without its unforgettably blistering pop jams. Out August 6, Hobo Rocket is a near-perfect record — but only if you can crank it up.” (via NPR)

4) Moderat, II. “The German dance music duo Modeselektor makes music that can knock your head off its axis. Electronic producer Sascha Ring, better known as Apparat, has made the kind of stuff that buries your heart deep in your gut. Moderat, the project that unites these two seemingly disparate energies, finds a sweet spot that resonates with both body and mind… Drama is what II does does best, and nowhere is it bigger than on the last track, ‘This Time.’ A back and forth dance between delicate organs and dazzling synths, buffered by pitch bending curveballs that mold energy like putty.” (via NPR)

5) Medicine, To the Happy Few. “With all due respect, shoegaze’s history wasn’t written by English bands alone. Out in Los Angeles, a group called Medicine were adding to the ’90s art form in their own way, tempering all that guitar wash and rhythmic drone with bright, psychedelic notions and unexpected shifts in arrangement… On August 6, [the band’s original lineup will] release their first new set of songs together since 1995’s Her Highness… Guitarist/mastermind [Brad] Laner, singer Beth Thompson, and drummer John Goodall are a force to be reckoned with once again — deadly inventive, and armed with the chops and chutzpah required to deliver on their wild ideas.” (via SPIN)

7) UZ, TRAP SHIT 14/15 EP. “With his latest installment of the TRAP SHIT series… [UZ’s] crisp production techniques shine through again. Chopped and warped vocals become drum patterns of their own as chimes, blips, bleeps, and plunks rain down and moon-bounce back up again. It’s aggressive and menacing and the drums loom with intimidating force (i.e. what all trap instrumentals aim for). But there’s a casual air to UZ’s scare tactics: He’s also the guy who manages to keep his cool while challenging you to a fight.” (via SPIN)

8) Jake Bellows, New Ocean. “Jake Bellows clocked more than 15 years as the frontman for Neva Dinova, a genre-bending Omaha outfit that issued five albums and toured with the likes of Stephen Malkmus, Death Cab for Cutie, Rilo Kiley, and Bright Eyes… After a brief hiatus from music, Bellows is planning a comeback with his debut solo record, New Ocean, out August 6 on Saddle Creek. The 11-track LP features ‘left turns into drunk-in-the-sun bossa nova, blue-eyed-soul ruptured by fuzz guitar, [and] love songs that are not necessarily ballads.'” (via SPIN)

10) Demon Queen, Exorcise Tape. “Demon Queen is a match made in some gloriously fucked dimension… you’ve got Black Moth Super Rainbow main brain Tobacco, a vocoder-loving Pennsylvania hippie whose work has been getting more and more beatwise of late. And then there’s Zackey Force Funk, a Tucson-based ex-con who’s got a wicked way with the spraycan and an appreciation for Zapp… Throughout [Exorcise Tape,] Tobacco growls out robotic come-ons while Zackey bleeds pained falsetto across the gooped, synth-strapped burblers. While ‘Puni Nani’ digs up some vintage Prince and doesn’t bother to dust off the grit, ‘Bad Route’ sounds like abstracted, acid-addled G-Funk, and ‘Love Hour Zero’ makes like Boards of Canada on ecstasy.” (via SPIN)

12) Pop. 1280, Imps of Perversion. “Scumsucking New York noise-punks Pop. 1280 will return with their second album August 6 via Sacred Bones. Dubbed Imps of Perversion, the 10-song set was produced by Martin Bisi (Sonic Youth, Swans) and is, according to the label, expected to include ‘stories of lust, sexual confusion, temptation, and debauchery’… The bleak and shreddy quartet has shared the first song from that set and it doesn’t disappoint. ‘Lights Out’ is clanging, shreddy, bleak, and chock-full of uncomfortable tension as Chris Bug horrifically howls about prison kisses and dripping detritus.” — SPIN (via Pitchfork)

13) Modern Hut, Generic Treasure. “‘It’s an anti-pop song,’ says Modern Hut main brain Joe Steinhardt when discussing ‘Life,’ the second single from the project’s upcoming debut album, Generic Treasure… [It’s] a deceptively funny duet with Screaming Females frontwoman Marissa Paternoster that’s built around regret and death. ‘I’m not proud of the things that I’ve done in this life,’ the pair sings, recalling the boy-girl back-and-forth of the Moldy Peaches. ‘But that’s all right / ‘Cause I will die.'” — SPIN (via Pitchfork)

14) The Polyphonic Spree, Yes, It’s True. “[The] cultlike Texan psych-pop choir the Polyphonic Spree haven’t released a proper album in about six years, but [they’re back] with the new studio effort Yes, It’s True. The album collects music that the band’s recorded over the past few years, and frontman Tim DeLaughter (former leader of the underrated ’90s grunge-poppers Tripping Daisy) says, ‘This record feels like a collection of ‘songs’ rather than a long listening piece which we’ve done previously in the Spree stylistically. It’s kind of refreshing.'” — Stereogum (via Pitchfork)

15) Bare Mutants, The Affliction. “In the absence of new music from the Ponys, fans of noise-streaked rock can turn their lonely eyes to Bare Mutants. The Ponys haven’t put out a studio album since 2007’s bracing Turns the Lights Out dropped via Matador, but the Chicago band’s frontman, Jered Gummere, is back leading a fresh five-piece… Bare Mutants have previously shared ‘Crying With Bob,’ and now you can hear ‘Growing’… Both are patiently sculpted works rich with fuzzy guitar, garage-rock organ, and echoing baritone vocals.” — SPIN (via Pitchfork)