1) Fuck Buttons, Slow Focus. “Founder Benjamin John Power promised a ‘very alien’ aural landscape in contrast to their previous two records, due in part to the fact that the new one is self-produced. Indeed, 2008’s Street Horrrsing… and 2009’s Tarot Sport… bore the touch of their respective contributors, but the first taste of Slow Focus sounds like something else entirely. ‘The Red Wing’ is a churning, menacing wall of grind that somehow still bounces atop a lithe breakbeat groove. And as the track progresses, whatever space was left is slowly filled with celestial atmosphere, bringing to mind Dead Seas-era M83.” (via Pitchfork)

2) David Lynch, The Big Dream. On “Are You Sure,” the LP’s closing track: “Those high, slightly twanged vocals, the gushy ambient vibes, the mellow tempo, and the searching melodies — its constituent parts taken together, ‘Are You Sure’ bears a strong resemblance to Phosphorescent’s ‘Song for Zula,’ from [this year’s] Muchacho. Of course, it also sounds a bit like Flaming Lips circa Soft Bulletin, and also like James’ song for Donna (and Maddy, amirite?) in Twin Peaks, ‘Just You.'” — SPIN (via Pitchfork)

3) Andrew Cedermark, Home Life. “Andrew Cedermark used to play guitars in the New Jersey band Titus Andronicus, whose songs are so stuffed with words, they’re often sent flying out like spring snakes… But as a solo artist, Cedermark plants his warble like land mines under layers of guitars that billow and rumble, Crazy Horse-style. He writes songs about loneliness and alienation… but it often takes several listens to locate the words. Cedermark’s guitars, on the other hand, are the equivalent of his former band’s lyrics: They’re buzzing all over Home Life, as he mixes homely dissonance with strangely crooked, decidedly beautiful majesty.” (via NPR) 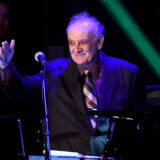 4) Pet Shop Boys, Electric. “Stuart Price, who produced Pet Shop Boys’ upcoming album, told SPIN recently the effort was going to be ‘a dance record,’ and ‘every track is going to have that euphoric, fresh feel to it… Pet Shop Boys have… shared the first song from the new record, ‘Axis,’ in the form of a hallucinatory music video. With a repeated ‘electric energy’ vocoder hook atop rubbery synth-pop that could form a bridge between Cerrone and David Guetta, it’s definitely euphoric [and] definitely pretty banging.'” — SPIN (via Pet Shop Boys’ website)

5) Chance Martin, In Search. “In 1981, [Chance Martin] cut his own musical path with In Search, an otherworldly mix of country, garage, and psychedelia, a little-heard Southern Gothic gem delivered by a spacesuit-wearing lovin’ man… Now, Martin’s solo debut is getting a proper reissue on vinyl, CD, and digital formats via Paradise of Bachelors… Standouts include the previously heard ‘Mr. Freedom Man’, and the spoken-word torch poem ‘Blue Monday,’ as well as the molten passion plea ‘Love by Chance.'” (via SPIN)

6) A Grave With No Name, Whirlpool. “On Whirlpool, A Grave With No Name moves out of the bedroom and into the studio, this third album functioning as both a completion of something and a new beginning entirely for London’s Alex Shields. The introspective space explored beautifully across 2009’s Mountain Debris and 2011’s Lower receives a rich redecoration here… There are guests, too — Echo Lake’s Linda Jarvis, Comanechi’s Akiko Matsuura, and Ides’ Alanna McArdle — who pair their gorgeous, humming vocals with the often darker reverberations of Grave’s gothic rock fuzz.” (via SPIN)

7) Le Youth, Summer Nights. “Le Youth’s interest lies in the intersection of two concurrent scenes that rarely actually touched one another while they were active: Clinton-era American R&B and ’90s house from around the globe — a bit of historical revisionism that has Brandy sittin’ up in her room at the Pacha in Ibiza. The end result is nostalgic, breezy, blissful, and swooning. In other words, his sound is perfect for Summer Nights. That also happens to be the name of the exclusive mixtape Le Youth has concocted for SPIN to help us properly embrace the sunniest of seasons.” (via SPIN)

8) Night Birds, Born to Die in Suburbia. “Night Birds hail from the New York/New Jersey area, but the punk foursome’s latest album, Born to Die in Suburbia, owes a heavy debt to California hardcore heroes Agent Orange and Adolescents. The follow-up to 2011’s The Other Side of Darkness sneers with East Coast cynicism (see opening track ‘Escape From New York’) while riding a wave of tightly wound So Cal fury (sample the snotty ‘Maimed for the Masses’).” (via SPIN)

9) Mayer Hawthorne, Where Does This Door Go. “In the course of three studio albums, Michigan-bred soul singer Mayer Hawthorne has refined his gift for songs that emulate and update his home state’s Motown sound… Though little bursts of profanity and transgression poke through now and then on Where Does This Door Go… Hawthorne most frequently plays the role of reluctant Lothario; he’s a romantic bystander, victim or dupe rather than a predator. In ‘Back Seat Lover,’ he seems to lament being pulled into a tawdry secret fling — only to conclude, ‘Well, let’s get it on, then.’ In the slickly catchy ‘The Innocent,’ the woman in the scene he sets is cast as a bloodthirsty conqueror; the song itself calls to mind Hall & Oates’ ‘Maneater’ in more ways than one.” (via NPR)

10) Spoek Mathambo, Escape From ’85. “Escape From ’85 [is] a mixtape of 12 tracks inspired by the year of Spoek’s birth… celebrates the music and culture of the 1980s — featuring guest artists including Yadi, Terri Walker, BB James, Seye, Cherry B, DJ Wool, Cerebral Vortex, Fannie Sosa and DJ Maddjazz.” — DatPiff (via Spoek Mathambo)