"Business School for the Dead" valued at surprisingly affordable price 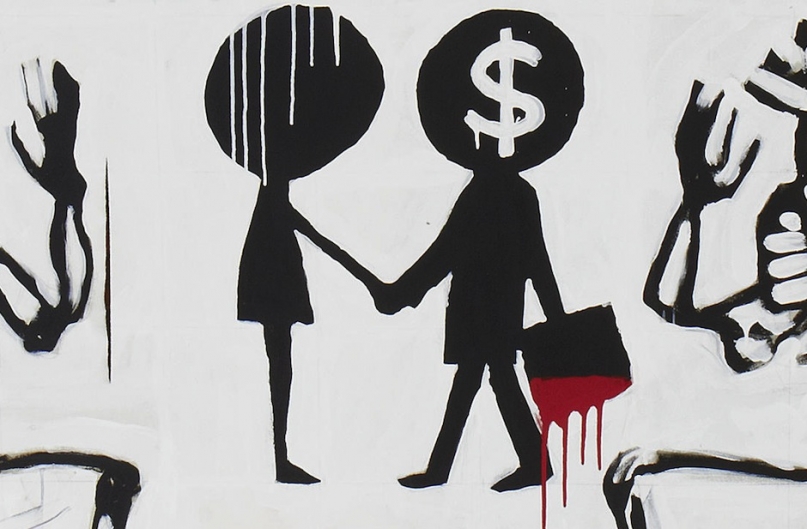 In a recent interview with Alec Baldwin (!), Thom Yorke discussed going on “bad painting trips” with Stanley Donwood, a friend since college who was created all Radiohead and Yorke-related album art and posters since 1994’s The Bends. Now someone with at least several thousand dollars to spare can bid on a Donwood-Yorke original painting at auction.

As Yorke pointed out today on Twitter, a 2005 painting he did with Donwood for the anti-poverty Trade Justice Movement is being sold to benefit that group. The painting bears the text “Business School for the Dead” and shows skeletons, devilish angels, and a pair of creepy businessmen shaking hands (one with a dollar sign for a face, plus a suitcase dripping blood). Yorke wrote, “Hope someone in the financial industry buys this, what a novelty to have a painting at auction ha!”

Take a closer look at the full painting and check out the official listing over at auction host Bonhams. The acrylic-on-canvas painting, signed by Yorke and Donwood, is 122 inches by 44 inches. Bonhams estimates its worth at $5,500 to $6,300, which considering how much paintings can sell for is actually surprisingly inexpensive. The irony, of course, will lie in the big spender willing to shell out so much money for an image that makes a grotesque mockery of capitalism. Wonder if Bonhams takes Capital One cards.