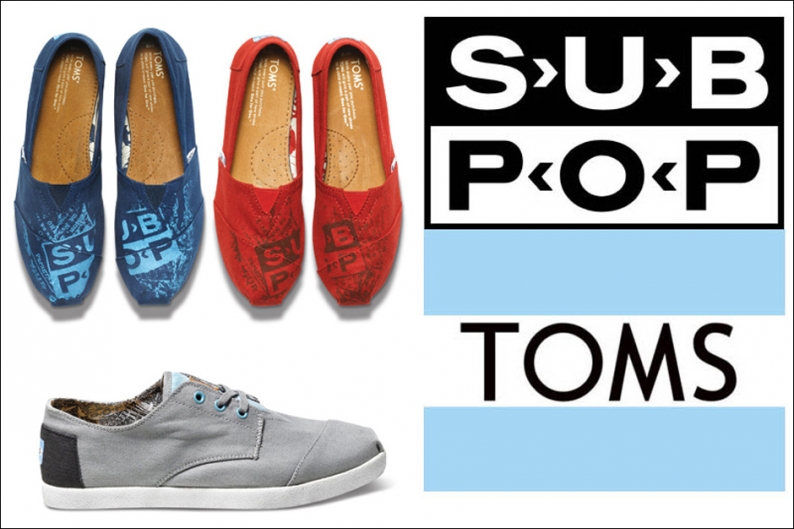 In honor of the iconic indie imprint’s 25th anniversary, Sub Pop has teamed up with TOMS Shoes to release three limited-edition kicks. Shown above, the sensible swag will include two versions of the “Classic” slip-on (blue for the boys, red for the girls) as well as a gray lace-up, rubber-soled “Paseo.” Each will incorporate custom imagery provided by Seattle-based label.

The shoes will come with a download code for a set of new and rare songs from Shabazz Palaces, Mudhoney, Father John Misty, Pissed Jeans, METZ, Shearwater, King Tuff, and others. Also, as is the TOMS way, for every pair purchased, a second pair of shoes will be given to a child in need. They will be available starting July 1 via TOMS online, the TOMS shop in Los Angeles, the Nordstrom website, and the retailer’s store in Seattle.

Northwesterners will also have a chance to nab the shoes at the free Sub Pop Silver Jubilee going down July 12 and 13 in the Georgetown neighborhood. The anniversary party will feature performances from Mudhoney, J Mascis (himself a shoe designer), the Afghan Whigs’ Greg Dulli, and more, and will benefit Seattle nonprofits 90.3 KEXP FM, Northwest Harvest, and Northwest Parkinson’s Foundation. For more information visit Sub Pop.