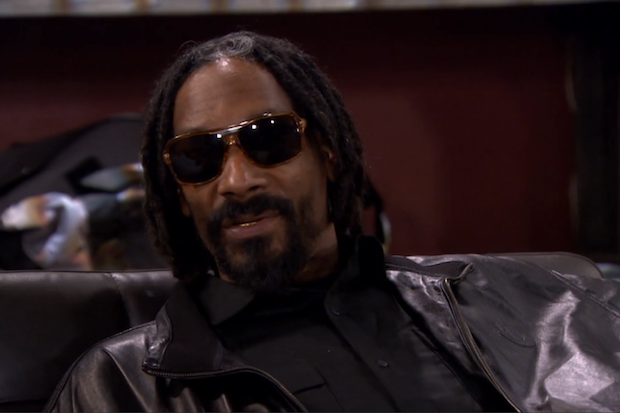 So, it’s pretty apparent that the HULU soap opera One Life To Live, which just last month, allowed absurdist rapper Riff Raff to make an appearance as a lecherous baller named Jamie Franko, realizes that it’s got absolutely nothing to lose. The main thrust of the show’s casting decisions seems to be, “What weird stunt can we pull that gets people talking?” And recently, the show has been using big, eccentric hip-hop personalities to garner interest. Snoop Lion has been popping up on the show since May 28th, but his final appearance, on today’s episode, was the strangest. He showed up to give advice to character Matthew about being a father who needs to stick around and raise his child: “A real man don’t run. A real man don’t reject his blood.”

Actually, it turns out that these slightly ridiculous rapper cameos are actually the most down-to-earth and reasonable thing about this impossibly strange, clearly DGAF, Internet-only soap opera. Other weird things that happen: At one point, Snoop snaps his fingers and a dude with a giant poster of his album Reincarnated walks into the room and hands it to a female fan. Then, Snoop promptly signs it. Also, in a surreal, before-commercial interlude, a few of the characters slow-dance to a Snoop song called “Brand New Start,” which will now be the theme song to this batshit crazy show. Finally, a few more Snoop Lion quotables: “A lot of little young dudes mess with a lot of young ladies and lot of ladies make babies”; “See, this is the part of the story where the bird gets pregnant smart-ass”; “See, one minute you knocking boots and the next minute someone handing you a baby.” Watch Snoop provide fatherly advice below: