With Jackson Browne, Kings of Leon, and special guests 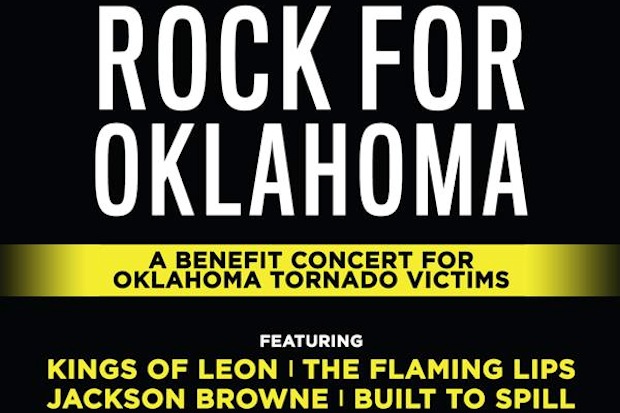 Nearly two months to the day that a massive tornado ravaged Moore, Oklahoma, a number of bands will play a benefit concert with proceeds going to the victims left in the disaster’s wake. The Flaming Lips, Built to Spill, Kings of Leon, and Jackson Browne, plus special guests, will take the stage at Chesapeake Arena in Oklahoma City on July 23. Tickets go on sale at 10 a.m. Friday (June 14) via Ticketmaster.

According to organizers, revenue from “Rock for Oklahoma” will be dispersed to charities and community organizations throughout central Oklahoma.

The F5 tornado that hit Moore on May 20 killed 24 people and injured more than 350 others, but it wasn’t the only tornado to cause damage, injury, and death in the area this year. The day before the Moore tornado, a tornado near Norman killed two and injured six. Another tornado on the first of June in the suburbs of Oklahoma City left 13 dead, including four children. The Flaming Lips formed in Norman and currently operate out of Oklahoma City. Kings of Leon were raised in a small town southeast of Oklahoma City named Talihina.

On May 31, a benefit concert organized by country star Blake Shelton and aired by NBC raised more than $6 million for Oklahoma’s tornado victims.