?uestlove: ‘I Could Actually Use Some Friends’

Home » Features » ?uestlove: ‘I Could Actually Use Some Friends’

As you might expect, the book isn’t a straightforward tell-all nor chronological catalog of celebrity encounters. Instead, ?uestlove’s narrative is peppered with philosophical asides from Greenman, album lists from the drummer, and footnotes from Roots co-manager Richard Nichols that are equal parts enlightening and provocative. Plus: Lots of celebrity encounters.

We spoke with ?uestlove, 42, during a quick break from his daily Late Night With Jimmy Fallon duties, about trying to make sense of his own life, how music holds back friendships, and where he’s headed.

As you worked through the book, or when you looked back on it after you were done, what surprised you about what stood out in your own life?
Writing it I thought, “This is not interesting.” Reading it, I felt like, “Oh, okay I like the character that’s writing the book. I like this guy.” At first there was a lot of resistance on my end in doing the book. I kept telling the people I was working with, “You know, a rapper without a [salacious] shark story is a waste of paper.” I don’t think people want to know about ribbon microphones. I didn’t feel like I knew what was interesting. Because I’d never written a book before [co-author Ben Greenman] took me through the process, which was basically like: Talk about being on the road with your parents under the age of 5, and keep it under 2,000 words. So it would be a month of that at a time. Six months into it, I basically told them, “I’m still very uncomfortable telling this story, even though it’s my story.” I’m used to the jury system that we’ve always had in the Roots and only when I started infusing Rich’s stuff did I start to feel comfortable. With his stuff I felt I wasn’t leaving things out or making it too one-sided. Left to myself I felt like my story would’ve been about rainbows and blueberries and smiley times. So looking back, I was ultimately shocked that the story, on paper, seemed somewhat engaging.

It seems like trying to gauge what’s interesting, as opposed to just getting everything down, is almost an impossible task. You have a great anecdote in the book about going roller-skating with Prince. I’m sure Prince doesn’t think that’s a particularly illuminating story, but it gives such good insight into his personality. Artists aren’t always the best judge of what’s interesting about themselves, you know?
Well they had to drag that story out of me because I was really talking about J Dilla’s death, and the only way that I could get to Dilla’s death was by starting with that whole period of pre-Valentine’s Day 2006. [Dilla died on February 10 of that year.] So I had to kind of go through that whole process of what that week was like. Incidentally, I went roller-skating with Prince that week. Then [Greenman] said, “You have to talk about that!” I have a lot of those Forrest Gump, I-was-there moments. Roller-skating with Prince is the least of it, but I didn’t want the book to turn into ?uestlove’s Hollywood Stories. I wanted it to be my story, as opposed to my observations.

There’s a line that you go back to a couple times: “When you live your life through records, the records are a record of your life.” And that made me think about how there’s a lot more in the book about your feelings about certain albums rather than certain people. Obviously your obsession with music is a huge part of how successful you’ve been, but do you think its come at the cost of emotional development with real-life humans?
It’s funny you said this. So last night I’m at a dinner; I thought I was having a one-on-one dinner with a friend of mine who was on the show recently. The two of us were there, then it became four, then eight, then twelve. Suddenly I’m eating dinner with two people I definitely know and 10 strangers I don’t know. If that interaction had been sprung on me any other way, I would have been terrified. And can I tell you that three hours into it, it was the best time of my life? I was borderline kicking myself because I was like, “Yo! Damn!” One of the people there, a known actor, I thought I could have been this guy’s best friend. I was thinking about the first time we met, back in ’95, and I was like, “Aw man, I’m antisocial but this guy could have been my best friend.”

So your relationship with music has been a hindrance sometimes?
My whole point is that at that moment, I realized I could actually use some friends. I consider the Roots my family but I work with these guys, and more than that, half the band sees me as the leader, the boss. That’s a very specific kind of friendship. Whereas being connected with a bunch of people I have absolutely zero professional ties to — that’s new. I’ve spent every free second of my life listening to music, watching Soul Train, creating music, and reading books about music. That’s what I did with my life. Maybe I had a moment of regret that night at dinner when we all said good night and I was like “Whoa, I need friends.” I’m looking at their phone numbers and I’m like, should I call them again?

Start with a text.
You’re right. I’m going to do that. It’s like asking a girl out, like, “You guys want to get dinner?” But it was a life-changing, game-changing moment at dinner. It was great for me. I needed it. I went to bed yesterday and said, “Wow … friends.” I needed for that to happen in my life. 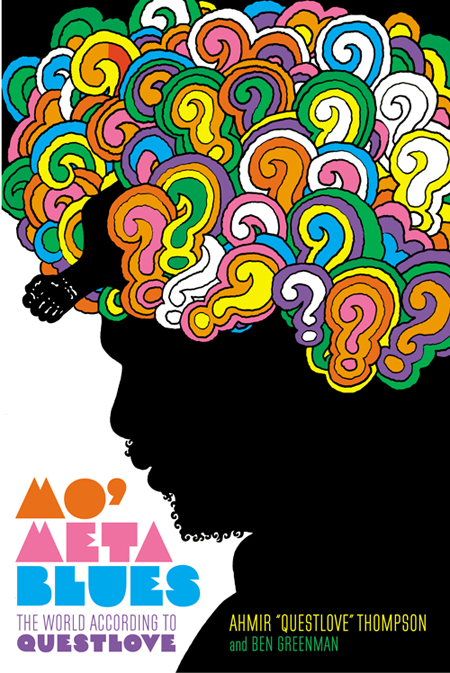 Who was the person?
Aw man, I shouldn’t say.

The book makes clear that a career is something that ebbs and flows unpredictably, but it definitely feels like you’re at a peak of influence right now. Is there anything you definitely want to accomplish in this moment?
I’m still superstitious with success. The way that I felt that a window opened for the Roots between ’97 and 2003 — that isn’t lost on me when I look at 2007 and 2013. In the back of my mind I’m bracing for the eventual shutting of a window again in 2014; the same way that it closed in 1994 and in 2004. I’ve always just been under the impression that the fours and sevens are the dark periods, or that the sevens and three years can be kind of post-flood moments.

So while that window is still open, what do you want to do?
Well, why do I have 12 jobs? My answer is that I was a little traumatized when I was unprepared for an earlier downswing. When I spoke [in the book] of a funereal moment at Dave Chappelle’s Block Party [in 2004] when I realized, “Oh, this is over,” I figured that I could either fight or I could just die quietly. And I chose the latter, but I kept seeing that I was alive! So now I feel like I got that secret gold coin in the Mario Bros. game. I have to grab every coin I can, because you never know when you’re going to lose the power. This time around, I’m doing everything I can to prepare for an eventual storm. But who knows? Maybe I’ll have a great 2014.