Who Charted? Queens of the Stone Age Are No. 1

Meanwhile, Disclosure takes the top slot across the pond 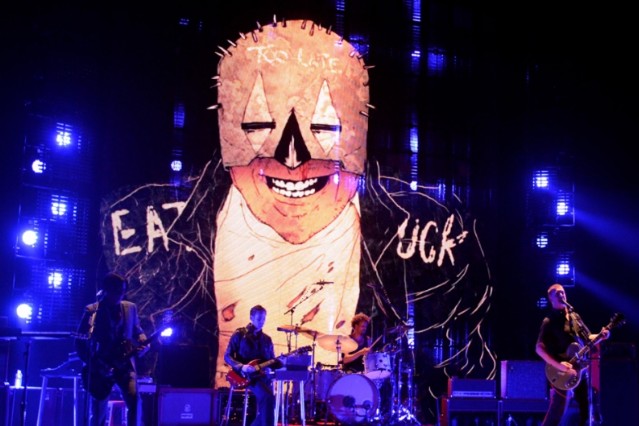 First! Queens of the Stone Age, motherfucker. The SoCal desert rock kings score their first No. 1 album with …Like Clockwork, proving what SPIN already knew: Josh Homme is thee finest hard-rock songsmith of these modern times. The band moved 91,000 units according to Nielsen SoundScan, a whopping 12,000 of which came from vinyl. That’s the second largest wax week since Billboard launched its vinyl chart in January 2010. The only bigger get came with Daft Punk’s Random Access Memories, which moved 19,000 black platters two weeks ago. But for those disco-living droids — who have now been pushed down to No. 2 (62K) — vinyl sales accounted for 5 percent of their haul. With QOTSA, it was 13 percent. Congrats to Matador Records, the band’s new indie home, for notching their first No. 1 LP in the process.

3 to 10: As Daft Punk’s overall sales for the new album approach half a million, the rest of the chart feels a bit sleepy. Or maybe that’s just the influence of Sleeping With Sirens (Feel, 59K, No. 3), a band which we’ve never heard but will safely guess involves hair swoops, high-pitched screams, and technical guitar solos. Country star Blake Shelton rises a slot to No. 4 with Based on a True Story (36K) while Dabblin’ Darius “Hootie” Rucker moves into the freshly vacated No. 5 (True Believers, 33K). Megadeth are back with Super Collider and their highest position in two decades (No. 6, 29K) — too bad the album is a sucky sack of knuckle-headed conspiracy theories and little genuine thrash. Imagine Dragons just need to stop already (Night Visions, No 7, 28K). Florida Georgia Line continue their crossover streak with Here’s to the Good Times jumping from No. 17 to No. 8 (27K). Justin Timberlake’s The 20/20 Experience (No. 9, 27K) racks up a 12th consecutive week on high. And the Barenaked Ladies are back (why?) with Grinning Streak closing out the Top 10 at a pretty measly 26K.

Blurred Lineage: As Robin Thicke’s “Blurred Lines” continued its Hot 100 rise all the way to No. 1 with that clutch Pharrell assist (or was it the QOTSA cover that did it?), Billboard did a little digging and discovered that the Los Angeles-born soul man is the first solo male to follow his mother into the chart’s Top 10. Gloria Loring of Days of Our Lives fame nabbed a No. 2 in 1986 with “Friends and Lovers.” She also co-composed the theme songs to Diff’rent Strokes and The Facts of Life with her husband, Alan Thicke.

Full Disclosure: U.K. house usurpers and SPIN faves Disclosure have scored a No. 1 on their own turf with their Essential debut Settle. The duo’s U.S. chart position hasn’t yet been announced, but they did successfully Josh-block Queens from a pond-spanning victory. Maybe the Lawrence brothers can make up for it with a remix of “My God Is the Sun.”