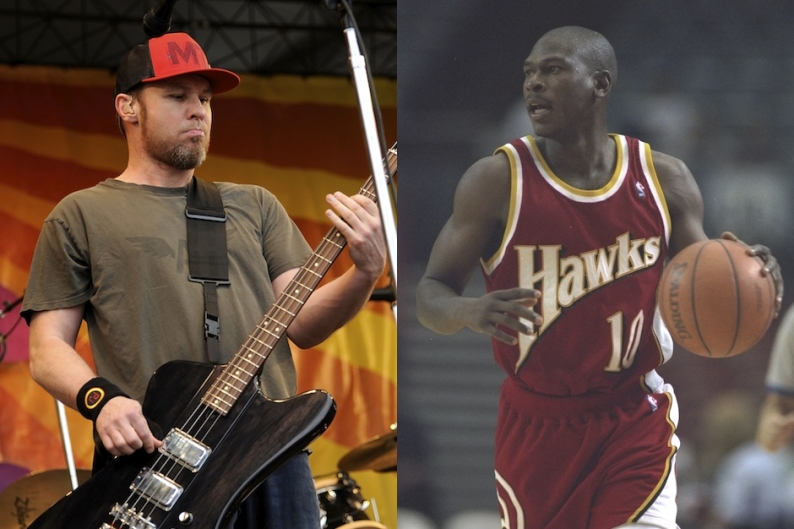 “Sending good thoughts to Mookie,” Pearl Jam wrote in an Instagram post over the weekend, along with a photo of former NBA point guard Mookie Blaylock in a New Jersey Nets jersey. Blaylock, who was part of a car accident on Friday afternoon, has longstanding significance for the band. In fact, Pearl Jam’s original name was Mookie Blaylock, and they titled their landmark 1991 debut, Ten, after Blaylock’s uniform number.

Jeff Ament, Pearl Jam’s bassist, told the New York Times the connection goes back to when he, Eddie Vedder, and the band’s other original members would open packs of baseball cards during their early days of recording. “One of the cards that went to my manager, and ended up in a cassette, was Mookie’s card,” Ament told the Times. “Fast-forward a couple of weeks: We got offered the Alice in Chains tour on the West Coast. The cassette was sitting on the desk, and somebody said, ‘What about Mookie Blaylock’?” The group liked his name, but also his skills on the court.

Though Pearl Jam eventually became Pearl Jam, and Ament said Blaylock’s name was never meant to be the permanent name of the group, the band stayed connected with its basketball muse. Ament told the Times he followed Blaylock throughout a career that began in college with Oklahoma and included NBA stints with the Nets, the Atlanta Hawks, and the Golden State Warriors before his retirement in 2002. Ament met Blaylock and played H-O-R-S-E during a Seattle trip to play the Seattle Supersonics. The Pearl Jam member raved to the Times about “how nice” the NBA player was, and said he recently set aside a photo of himself and Blaylock for framing.

Blaylock’s sport utility vehicle allegedly crossed the median and hit a van in an Atlanta suburb on May 31, killing a passenger in the van. Blaylock is in serious condition. Jonesboro, Georgia, police have said they charged Blaylock with driving on a suspended license and failing to stay in his lane.

Pearl Jam guitarist Stone Gossard has been in the midst of sharing songs from his new solo album, Moonlander, due out on June 25; check out “King of the Junkies,” “Both Live,” and “I Need Something Different.” But Vedder said around the beginning of 2013 the band was “maybe halfway there” with an upcoming LP of its own, and guitarist Mike McCready told Rolling Stone in February the band would finish the record “this year, for sure.”

A possible title and release date for new Pearl Jam music popped up on Friday. A now-removed listing at All Access indicated Pearl Jam are set to put out a new single called “Mind Your Manners” on July 16, Grunge Report notes (via Antiquiet). In the meantime, best wishes to Blaylock, his family, and the victim’s family after Friday’s sad events.