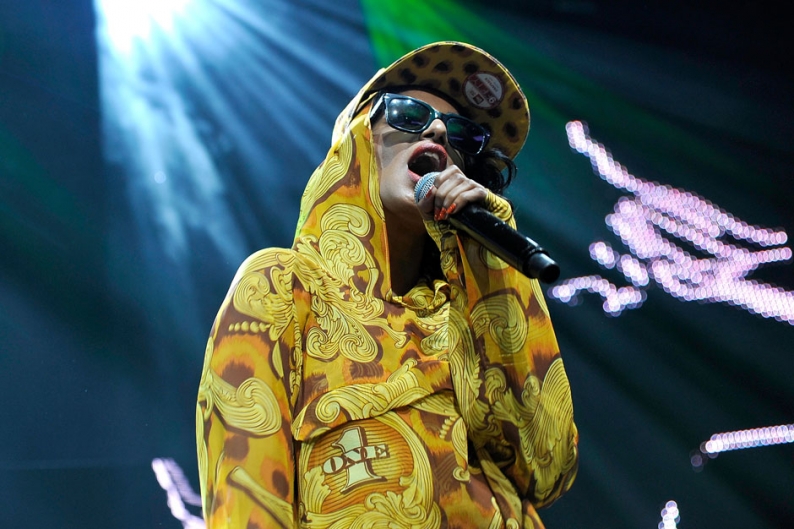 M.I.A. debuted her newest track on Zane Lowe’s BBC Radio 1 program on Monday. “Bring the Noize” is fittingly loud and urgent, paying tribute to its forbearers in Public Enemy, but also seating the sound smack-dab in the middle of the era of digital overload. It opens in a hail of chopped up vocals — Maya imploring “free dem” — then gives way to pounding drums. There are asides for some TNGHT-style crunch and some unexpected songbirding, but mostly it’s heavy and wild.

She initially teased “Bring the Noize” by looping an audio snippet on the M.I.A. website and sharing two Vine clips of the track’s upcoming music video. The track will feature on Matangi, which is presumably out later this year. The LP was previously slated for a December 2012 release but was delayed. In January, Ms. Arulpragasam told Australia’s The Gold Coast Bulletin (via Rolling Stone) it’d arrive on April 15, and that Interscope pushed back the date because the music sounded too “positive.”

“I thought I’d finished it,” she said then. “I handed the record in, like a couple of months ago.” According to M.I.A., label executives wanted her to “darken it up a bit.” She explained, “It’s like ‘We just built you up as the public enemy No. 1 and now you’re coming out with all this positive stuff.'” In her brief chat with the BBC’s Lowe, she commented on that, saying, “I keep finishing the record, handing it in, finishing the record, handing it in. I’ve given up at this point.”

But she assured listeners that Matangi is indeed on the way. Only she might just “start releasing records from my bedroom” afterwards. “This was my last stab at it,” she said, presumably referring to releasing albums via major labels. In March, Maya shared an eight-and-a-half-minute sampler of the upcoming album called “Matangi Mix for Kenzo.” It was indeed dark in sound, although lyrically it was all about being thankful and we can’t have that, can we?