Jay-Z’s new album Magna Carta Holy Grail, out July 4, will almost definitely not be anywhere near the best rap album of 2013, but it’s just about got the title of “most ridiculous” locked up. To recap: A million copies of the album are going to being released days earlier via an app available exclusively on the Samsung Galaxy — the electronics giant paid Hov $5 million upfront for the exclusive. This has led to a manufactured debate between Jay-Z and Billboard over whether he has already gone platinum, an argument that only Jay-Z cares about but one which the magazine has nonetheless touted on the cover of its new issue. All this nonsense is just the tip of iceberg (the iceberg is a massive frozen block of Ace of Spades).

Over the weekend Jay released the album’s track list by handing out binders in Brooklyn (see video above), and it features songs called “Tom Ford” and “Picasso Baby” and “Beach is Better.” Even better (and by better we mean worse) is the bonus track “Holy Grail,” which features Justin Timberlake and interpolates “Smells Like Teen Spirit.” You can read the lyrics below (via Miss Info). Why is Jay-Z (or Justin Timberlake) singing the “Smells Like Teen Spirit” chorus outside the privacy of his own home? Probably because he can. The track list is below. 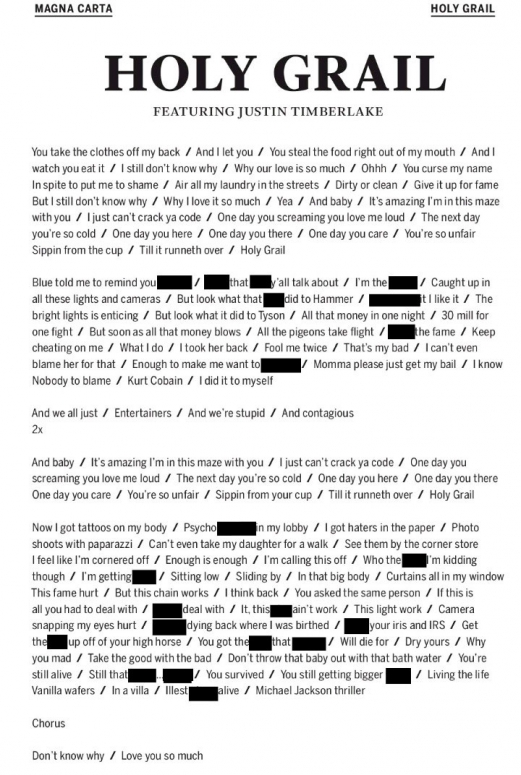