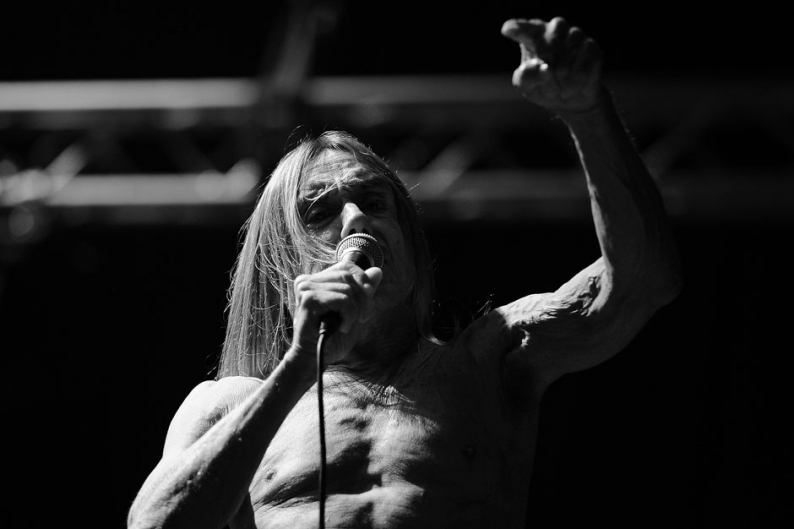 For years, comedian Marc Maron has proudly described himself as a cross between Iggy Pop and Woody Allen, equal parts rage and neurosis. When SPIN spoke with Maron back in January, the IFC star said that if he could curate a festival and pick anyone for the bill, alive or dead, Fun House-era Stooges would be a dream booking. So when Iggy recently appeared on the 400th episode of Maron’s WTF podcast, the 49-year-old stand-up was understandably excited.

“The fact that Iggy Pop was actually in my garage is some kind of milestone, a goal, and an amazing event,” Maron wrote on his website. “I will have you know that I was nervous when Iggy came over. I was probably more nervous than I have ever been for a guest. He got out of his limo. Walked around back with me. Stood out on my deck, arms outstretched saying, ‘This is great.’ And within minutes his shirt was off. If it were anyone else it would have been odd but that’s just Iggy. We walked together into the garage, me with my shirt on and him with shirt off, and we talked. It was just fucking great.”

Over the course of their hour-long chat, Maron and Iggy discuss the Ready to Die singer’s “super responsible” parents, the explosive effect that seeing the Doors live had on him (“I actually had an orgasm … well, with [my date’s] help,”), his brief fling with Nico, the early-career difficulties the Stooges faced, and his legendary ’70s collaborations with David Bowie. Listen to a snippet of the episode below, stream it via the WTF website, or download it here.